by mkb
Below are some images from the legend of quite a unique 1881H 1c coin. The die that made this coin started out as an Obverse 1, but was later resunk with an Obverse 1a hub. Confirming this is shape of the base of the portrait along with doubling that can easily be seen in the base of the portrait with the coin in hand. Tripling can be seen in VICT, with the tripling quite strong in the C and T - almost making these letters look blundered. Apparently, there was heavy doubling as a result of the resinking process, but some letters were still weak. So, they were restruck manually, resulting in tripling in some letters. This is easily evident in the T in VICTORIA and the T of GRATIA, as these T's do not match to the normal T's typically found on these coins of the period.

by zonad
Super photos, I think the different obverses being hubbed over another took place quite often as the dies were took to the furnace to be softened and then brought back for another impression.
by mithrandir

That a very impressive coin. 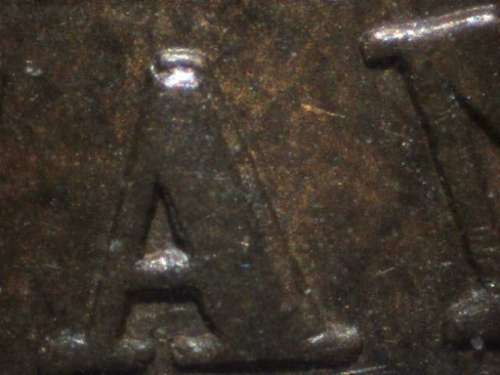 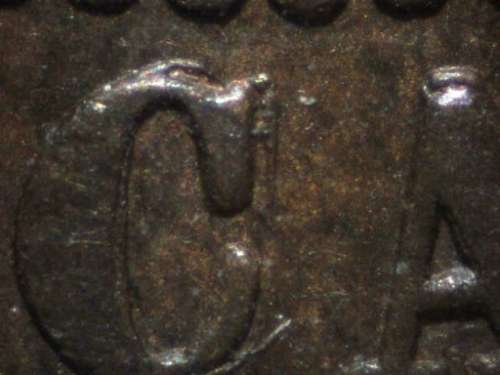 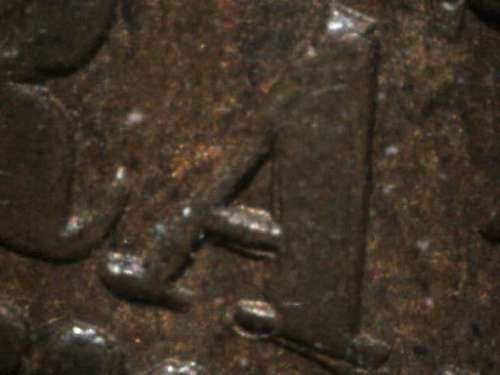 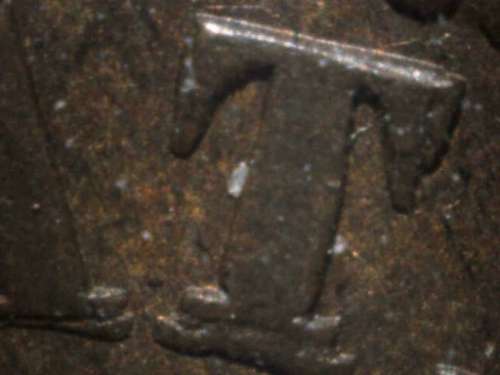 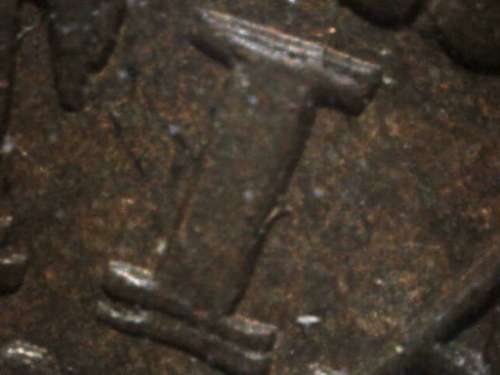 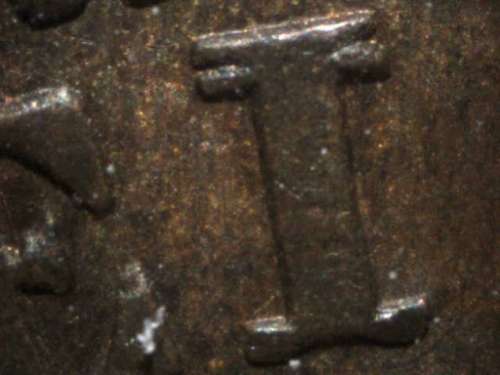 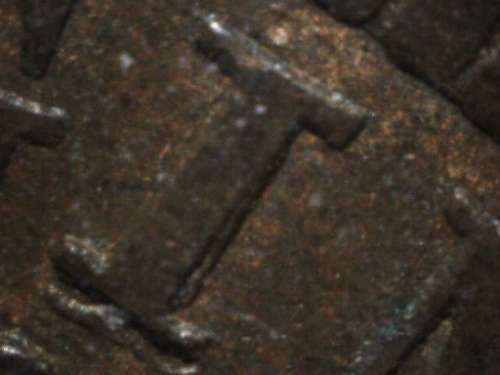 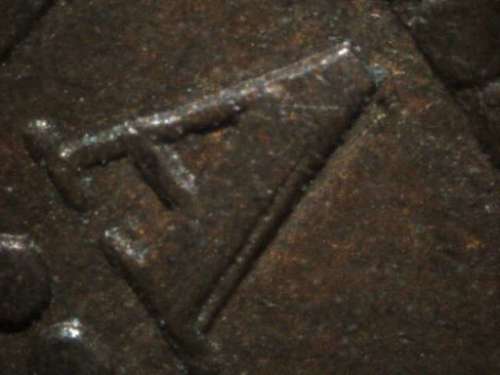 by Bill in Burl
There were no dies resunk at any time during the Victoria Large Cent mintages. The photos that began this thread are classic "hub doubling". There was no hand punching of all the letters for this particular coin shown (although ALL 1881's will show recutting/punching of the N's in Canada and Regina) but there are some letters on many Vicky Cents that seem to be repunched to clear up problems. This is a very popular variety and is refered to as an "around the clock" doubling, the same as described 40+ years ago by Hans Zoell. It is a coin that most variety collectors seek, but far from unique, as I have at least a dozen of them. There are also examples of the 1881 that have most hub doubling to the upper and right side of the legend (Gratia most often). 1881 is a great variety year, topped only by the 1859's. You must remember in this internet age that anyone can post anything and make it sound "for real". Be sure to double-check any information that you are going to use as a basis for research, ID, or thoery.

Bill in Burl wrote:Be sure to double-check any information that you are going to use as a basis for research, ID, or thoery.

by mkb
Here is an excerpt from the Royal Mint’s Annual Report for 1883: 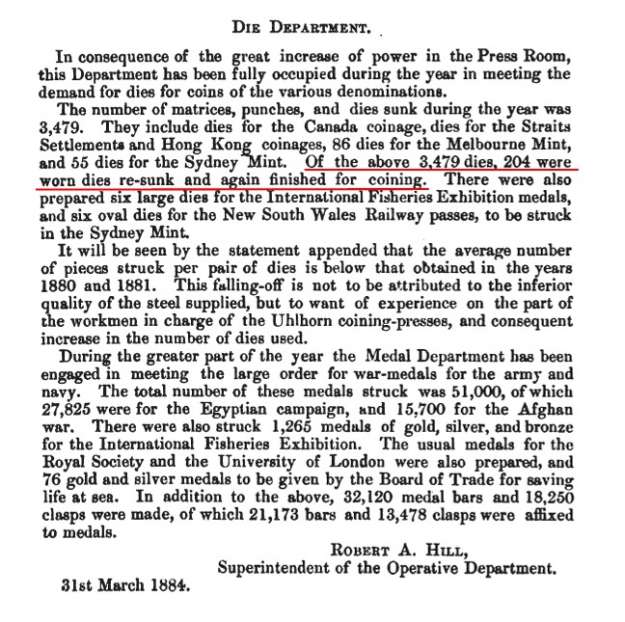 Clearly, the re-sinking of dies was being performed by the Royal Mint. The re-sinking of dies is reported in the first Annual Report issued in 1870, and carries on through to the 1890’s. To say that “There were no dies resunk at any time during the Victoria Large Cent mintages” is not correct, since the Royal Mint acknowledges otherwise. There is even a CNA report on this issued in 1978 that acknowledges this practice:

Here is an excerpt from that report:

“2 - NUMBER OF DIES USED: These figures indicate the number of obverse and reverse dies used to strike a particular denomination during a given year. As mentioned above, instances occurred when some dies used in the course of a year may have been manufactured and dated the previous year. It was also common practice in some years (mostly in the 1800s) to reprocess selected worn dies which had lost their sharpness of detail but were still otherwise sound. Such dies were softened, resunk and again prepared for coining. They were counted along with the new dies and included among the "number of dies used" for the year. Therefore, it is easily possible for a die (more likely an obverse die) to have been used to strike coins during one year and after being refinished, used again the following year. However, it is unlikely that such dies were in service for more than two years, since the refinishing process greatly reduced the die's life, making it much more susceptible to developing cracks which would eventually render it unfit for further use (for a more detailed explanation, see my article The Quality and Efficiency of Royal Mint Dies A Century Ago in the September 1978 issue of The Canadian Numismatic Journal.”

And there more than ample evidence to corroborate the practice. The re-sinking of Canadian 1-cent dies may have only been limited to coins dated 1881 and 1882, as so far, evidence of re-sinking has only been found in coins with these dates.

As for the statement “There was no hand punching of letters for this particular coin shown”, this too is incorrect. The letters C and T that are illustrated are clearly of a different size than that of any other Victorian 1-cent coins, and which can easily be discerned on the coin itself. The letters A and I that are illustrated also appear to be of a different size. Further, the C and the T are clearly of a different font – note the longer ends of the T’s and the shape of the C. As for the comment “but far from unique”, there was no suggestion that there is only one of this coin in existence. What is unique is these off-size and different shaped letters found on this coin as already mentioned. I am not aware these letters appearing on any other Victorian 1-cent coin.

by Bill in Burl
It is my opinion, and that of other long-time Canadian large cent variety collectors, that there was no purposeful "resinking" of any Canada Victorian dies, in the literal or definitive sense, by the British mints. Canada was its own country then and paid 'full-freight" for all the charges/fees by the mint for their coinage. There was no impetus for them to squeeze extra usage out of the dies to save money, because they could charge for new dies. More recent research into the Mint's own records seen to prove this out. The 1883 excert says nothing about if Canada actually had any of their dies resunk ... only that there was some done for the yearly total for all the "countries" for which they performed their coinage. Austrailia and the remainder of the other locales were not free-standing countries at the time, so the mint probably DID resink dies for them to defray the costs(Britain's own costs), but Canada was paying full-cost. As Zonad has put in a previous post to this thread, there was mixing of the working dies that took place as the dies were pressed to 2-4 times to make the full impressions and 1 or 1a dies were probably interchanged in the continuous process of annealing, pressing, hardening, etc and that is my opinion as well. I don't think that different fonts were used, as one or more of impressions were probably faulty due to plugged dies or insufficient pressure, making them weak and thin. There was always individual handpunching done to working dies to try to correct any anomolies, and that appear to be third strikes on some dies. I was referring to the general appearance of the doubling in all the letters, which are indicative of hub-doubling(1 of the 6+ different types of HD'ing). Many people will have differing opinions on what caused what, when, and how. That is just my opinion after 40 years of collecting/tracking Vicky large cents. Rob Turner's new book also sheds light on the subject and is great reading as the to cause and effect of hybrid-appearing dies.

There is no such mention, comment or acknowledgment in the Royal Mint reports of the period in question - the years 1881 and 1882 - that more than one hub was used to make a working die.

The reason for re-sinking dies was not a financial one, but was due to time constraints. The 1881 report acknowledges a breakdown of the die making press, and the 1882 report mentions much attention and effort being spent on medal production for the Afghan and Egyptian wars. Both of these situations would have reduced the time available for normal die production, and were likely the reasons for re-sinking worn dies used for the minting of 1-cent coins for Canada.

by Bill in Burl
Everyone has their own opinion on any subject, while others may have something contradictory. In this case, you are not going to change mine and I'm not going to change yours. There is nothing in the information that you provided that says that Canadian dies were actually resunk, only that some of the dies that the mint utilized for any number of countries, plus their own, had undergone resinking. The coin you displayed, plus all those that I have or have seen, are classic examples of hub doubling that crop up from time to time in any country's minting process. The standard explanations and examples of hub-doubling are in US texts (Alan Herbert's is the accepted reference for most people). I recommend that you read it.

Almost all 1881's have hand-punched N's in Canada and Regina trying to make full-footed letters from the previous single-footed N's that the 1876 dies had, as well as other letters that needed correction. By the later part of 1882, these N's were fully and properly corrected at the hub level. I would strongly suggest that anyone who wants to delve further into this to get a copy of "Dies and Diadems", rather than arguing the topic ad infinitum in a public forum. We are all adults and, once we read something, we can make up our own minds as to what is logical and what is not. For something that happened 130 years ago, we don't have the luxury of asking someone that was involved, we can only go by what people have found while exploring the files and documentation of the mint itself for days, which Mr Turner did on two different occasions. It's a mute point(this discusion) and is probably not of interst to anyone other than the 2 of us.

by mkb
"The coin you displayed, plus all those that I have or have seen, are classic examples of hub doubling"

When I last looked at the coin, it looked like a 1a/1, and even you have acknowledged that there are 1a/1's. So, a 1a/1 coin cannot be an example of hub doubling, as two different hubs are involved. But there are much better examples of strikes involving more than 1 hub. I have an 1881 1/1 - you can see this especially well in the D in CANADA, the C in VICTORIA and the D in DEI where there is both the complete and incomplete letters found overlaid on top of each other. This is not hub doubling since different letters are involved. There is also the 1882 2/1a in which some examples clearly have letters that came from two different hubs. And of course there is the 1a/1.

by Bill in Burl
In the making of any working dies, it takes multiple pressings from the hub, each followed by annealing and hardening, making it a multiday/week process, with any one of the following pressings maybe causing hub doubling or chattering/misalignment. I have over 200 1881 & 1882 Obv 1 or 1a large cents with at least 10 of each of the coins that you mention. I can only sugest that you study the process that led to what you have in your hand and look at each coin for the likenesses, as well as the differences, to see what ensued. You can't theorize what happened to a coin, postively, by looking at a single example. Were there different hubs that somehow pressed the same working die? .. .yes. Was there deliberate "resinking" of Canada dies to save time/money? ... no. BTW, if you read the book, you will see that it was actually a 1a die that was the first produced for the 1876 and following years, not the OBV1. The 1876 specimen is a straight 1a die with full-footed N's and no mint mark "H".
All times are UTC-05:00
Page 1 of 3
Powered by phpBB® Forum Software © phpBB Limited
https://www.phpbb.com/