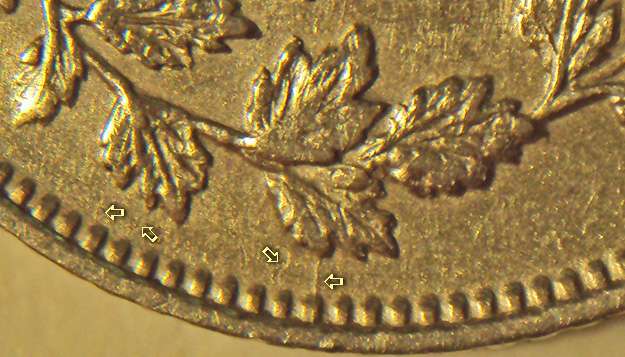 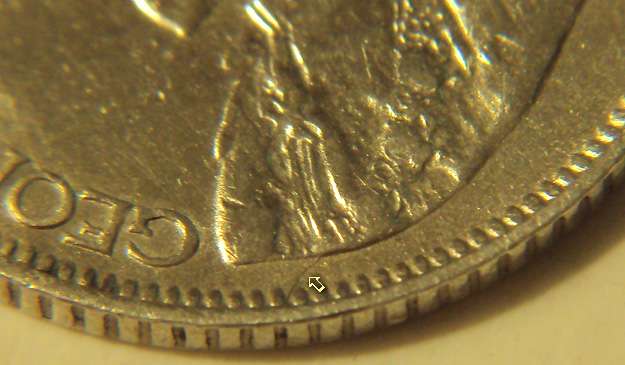 Yep, die cracks. Are these a rarity on your coinage? In the U.S., overuse of the dies makes these pretty common.
Cheers,
Will
Top

They are very common up here as well, especially with Vicky large cents.
Bill in Burl
Top

Will wrote:Are these a rarity on your coinage?

Can't argue with Bill on the Vickies (and if I did I'd be completely out of my league), but I can say from some experience that it seems to depend on the era and denomination. This 1913, from my complete GRV set (pretty well all F to EF, therefore good enough not to have cracks worn off) is one of two dimes that I can spot an error on. The other is the 1915 with two very fine cracks joining letters in the obv inscription. Neither it nor the '13 did I acquire knowing they had die cracks. That's 2 out of 21 right there--1911-1936, although the pair are just prior to and during WWI.

Earlier... I have a couple die cracks on Victoria five and dimes that I can think of at the moment (cracks running leaf tips to rim -- probably quite common) and an ERVII dime seen here

The 40's seem to have been a run of bad quality but I imagine this can be attributed to conditions during WWII. Obviously nothing then went to waste and a die, like everything else, was used to its limits to conserve metal and time. Perhaps there was also a less-experienced staff working at the mint at the time due to enlistments. GRVI dimes that I have found die cracks on are: 1939, 41, 43, 44 and 48. All but the 1948 I found in circulation during the '70s. Recently I've seen a handful of Bluenose dimes with cracks through the "10 cents" being sold on ebay (without comment of the error). I'd be surprised if this particular flaw wasn't one of the most common across all Canadian denominations.

I've previously posted on George VI penny and nickel errors in this sub-forum. Check those out if you want.

Tried to buy this 1943 quarter on auction last week but somebody else spotted the cracks (not mentioned by the seller) and as these things often go, decided I wasn't paying enough for it. Again WWII. 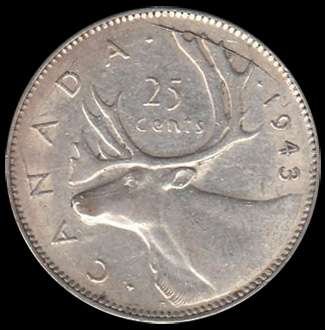 Thanks for the informative posts, Bill and Verdigris.

Vertigris .. that break/crack on the 25 cents is very unusual. 99.9% of the time, die cracks start at a stress point in the die (abrupt change of direction in the design) ... tips of leaves, ends of serifs, denticles, etc. I can't say that I've ever seen on around the periphery standing out all alone in the field even though it goes through the rack. Even I, as a large cent guy, would have snapped that up.
Bill in Burl
Top

Hi Bill,
I think if we'd gotten our hands on this '43, on closer examination it might have turned out to be a retained broken die coin that has worn just enough near the rim that in this low-rez photo the crack, as it reaches the denticles, is too blurred to make out. Take a look at the top of the coin and you can just see the crack ever so faint completing its path. At the other end it may or may not reach the rim... hard to tell. Now, from the top of the coin where this crack terminates, follow a line to the top of the A, then D, the next A, and further still to connect to the crack that runs from the top of the N towards the rim. Retained broken die there I'd say. I'd thought at the time, sure--more cracks-- but didn't connect the dots... too fixated on the antler crack.

Now stop talking about it. I'm already PO'd at myself for giving up.

Problem was I'm not a big quarter guy, and I was feeling a bit bitter for paying what I thought to be way too much for a 1910 VG a couple days earlier. A nice clean-looking coin, but still... a buck too much is buck too much. Because you see, I collect coins by the code of Eddie Shack... "Take care of those nickels and dimes kids, and the dollars will take care of themselves!"