You are: Home » Banknotes » Articles » A New Kind of Money-Playing Cards

A New Kind of Money-Playing Cards

In the late 17th century, the shortage of coinage grew so severe that New France's colonial authorities resorted to issuing a completely new kind of money: playing cards. In 1685, the government had no money to pay the wages of soldiers stationed at Qéébec. Intendant De Meulles had the ingenious idea of taking ordinary playing cards and writing an amount on the back. The cards were given to the soldiers, who accepted them as legal tender and began to use them in their transactions. The following year, 1686, the cards were exchanged for coins of the realm sent by boat from France. The experiment was such a success that, despite the misgivings of the King of France, who felt the colony ran the risk of incurring substantially higher costs, playing card money continued to be issued on a more or less regular basis. The item you see on the screen is a reproduction of the 1714 issue. No examples of playing card money are known to have survived. 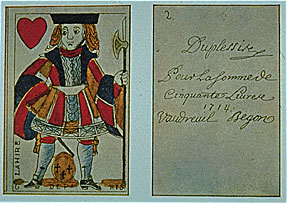