In the early days of settlement in Canada, any banking services were largely performed by merchants. Following the founding of the Bank of the United States in 1791, interest on the part of merchants in the provision of banking services in Canada increased. This interest was greatest in Montreal, the leading commercial centre at the time and, in late 1792, the first bank, called the Canada Banking Company, was formed by three firms of Montreal merchants. It is not thought to have operated for more than a few years.

The bank's principal function appears to have been taking deposits. Notes were printed but it is not known whether any of them were actually put into circulation. There was a widespread distrust of paper money in Lower Canada at the time due to the losses many people had suffered when most of the French Regime paper money was redeemed at only a fraction of the face value. If these notes did circulate, the Canada Banking Company would have been the first bank in Canada to issue notes. One of its few surviving notes is illustrated. This piece is in the National Currency Collection of the Bank of Canada. 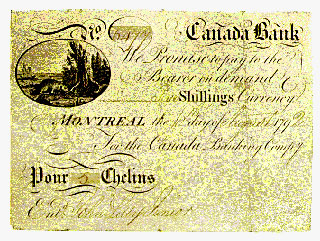