The French authorities in New France have the distinction of being the first government in North America to issue paper money. Known as card money and first issued in 1685, the notes were an emergency measure that enabled the Intendant to pay his troops before the annual pay ship arrived from France. The notes were handwritten on the backs of whole playing cards or segments, or on pieces of plain cardboard.

The increasing need to make expenditures at points outside the financial centres of Quebec and Montreal, together with the high risk of theft involved in overland shipments of currency, necessitated the development of another form of exchange. Treasury orders were therefore introduced as provisional payment, to be redeemed in card money at Montreal or Quebec. These orders circulated by endorsement, thus providing a local currency. By the early 1750s the French government began supplying printed forms for treasury orders, such as that shown, enabling greater numbers to be issued.

Under the last Intendant of New France, François Bigot, the issuing of government paper money was greatly abused for the personal profit of Bigot and some of his associates. Most of these men were later tried in France and Bigot himself was heavily fined and banished. As a consequence, a large quantity of card money and treasury orders was outstanding when New France fell to the British and only a small amount was ultimately redeemed. This instilled a distrust of paper money among the people of French Canada that lasted for many years. The treasury order illustrated is part of the Bank of Canada's National Currency Collection. 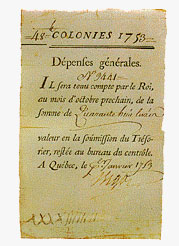