The Birds of Canada Series: 1986 - Articles on canadian banknotes - Coins and Canada 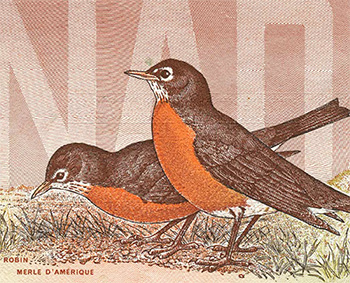 In 1974, with three notes of the multicoloured series still to be issued, the Bank entered into an agreement with De La Rue to prepare designs for its next note series. Research was focused on developing notes that would foil counterfeiters who tried to employ the latest advances in printing and colour-copier technology. By 1983, the Bank had decided to use clear, uncluttered images of Canadian birds on the backs of the new notes. The use of a single, large focal point in the design was considered more secure than other, more complex, submissions, because printing defects in a counterfeit note would be easier to detect.

According to the Bank's internal briefing notes, birds were chosen as the theme for the series because they were considered a fairly neutral subject... that cannot be seen as promoting the interests of any particular group or region. The birds chosen for each denomination had to complement the dominant colour of the note and had to be found across Canada. 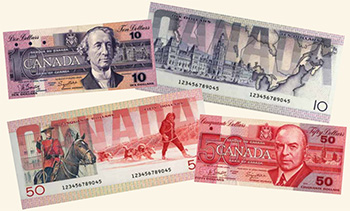 Models for the new series proposed by De La Rue in 1977. The back of the proposed $10 note featured the original Parliament Buildings, destroyed by fire in 1916, while the back of the $50 note retained the RCMP as its subject.

Both notes contain the Canada sky on the back, as well as many other characteristics employed in the final design of the note faces, such as the portraits, the large numerals, the coat of arms, and the horizontal central panel featuring various parliamentary vignettes.

But even this fairly neutral subject was criticized, as is always the case with a new design. Former Governor John Crow recalls one memorable complaint in his memoir Making Money. An angry citizen wrote to Governor Bouey to complain that no birds at all, whatever their name or colour, should figure on our currency. It seemed that the complainant's spouse was phobic about birds, and that this phobia extended even to pictures of birds. The letter concluded indignantly, How could you be so thoughtless!

The Birds of Canada series was the first to incorporate an optical security device (OSD) on denominations of $20 and above. At the leading edge of bank note technology, the OSD was a thin rectangle of film that changed colour from gold to green when the note was tilted, helping to combat the threat of counterfeits from colour copiers. The $50 note on which the OSD was introduced was one of the first bank notes in the world to include a colour-shifting reflective feature. 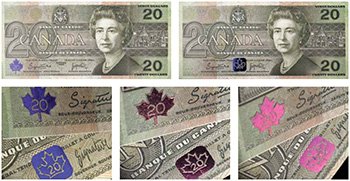 The Optical Security Device (OSD) is an example of Canadian collaborative research and development at its best. The process involved the application of several very thin layers of optically engineered material by electron-beam evaporation in a vacuum. It was developed by the Bank of Canada in partnership with the National Research Council and included the creation of specialized equipment. The final product drew on the resources of Vadeko International Inc. (a Canadian robotics company), ULVAC North America Corporation (who manufactured special equipment), 3M Canada Inc. (who developed a new type of adhesive), CBN, and BABN. The Bank later assumed production of the OSD and began marketing an optical security thread through De La Rue.

Other considerations also influenced the design of the new notes. In a report to Parliament in 1981, a special parliamentary committee on the disabled had recommended that Canada's paper money be designed so that the visually impaired could distinguish one denomination from another. All denominations in the new series (except the $1,000 note) therefore carried codes that could be read by hand-held electronic note readers. The larger size of the portraits and numerals also helped the visually impaired to differentiate between notes. Machinereadable bar codes were also printed on the reverse of the new notes to facilitate the use of high-speed note-processing equipment for counting and sorting. 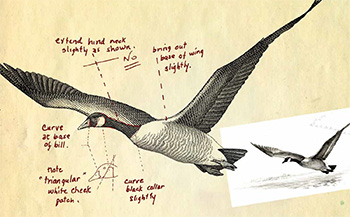 Born in Montréal in 1932, Yves Baril received his training at l'École des Beaux-Arts and at the School of Graphic Art, also in Montréal. He joined the Canadian Bank Note Company in 1953, where he apprenticed under Silas Allen, and remained in their employ for over 40 years, preparing images for bank notes, stamps, and other security documents. He retired in 1996. His work for the Bank of Canada is largely connected with the 1986 note series for which he engraved the portraits of former prime ministers Laurier and Borden that appear on the $5 and $100 notes, respectively. He also prepared the images of the snowy owl, loons, and pine grosbeaks.

Best known to Canadian naturalists as the illustrator of The Birds of Canada, by W. Earl Godfrey, Crosby acted as a consultant and provided artwork for the preparation of all the lithographic images of Canadian birds that graced the backs of the 1986 note series. Born in Toronto in 1925, Crosby studied forestry but found that his real love was drawing birds. He studied in the field and at the Royal Ontario Museum, guided as an illustrator by renowned ornithological artists James Baillie and Terence Shortt. He joined the National Museum of Canada in 1951 as artist-naturalist and illustrated many publications on birds, mammals, and other organisms. He also illustrated stamps, such as the 2-cent polar bear stamp issued in 1953.

Cost considerations and durability issues led to the production of new gold-coloured $1 coins by the Royal Canadian Mint in 1987. Consequently, the $1 note was not reissued as part of the new series and was gradually withdrawn from circulation. In February 1996, the Bank also discontinued the $2 bank notes, which the Mint replaced with bimetallic coins featuring a polar bear on the back. The introduction of the $1 and $2 coins reduced the cost of producing Canada's currency and also proved a cost-saver for some businesses: The Toronto Transit Commission, for example, estimated that the $1 coins would save it about $800,000 a year by reducing the need to unfold, sort, and count $1 bills. 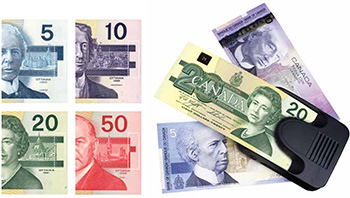 Variations in the bars near the outside edges on the face of the notes are measured by a detector in a small portable reader, which then speaks the denomination in either French or English, using synthetic voice technology. National Currency Collection

The $1,000 note was reintroduced in this series, to replace the 1954 $1,000 notes that had remained in circulation but did not contain modern anti-counterfeiting features. In February 2000, however, the government announced that all $1,000 bank notes would be withdrawn from circulation to prevent their use in money laundering and organized crime. The Bank stopped issuing $1,000 notes and began to remove them from circulation in May 2000.

Issued in September 1986 and printed by both CBN and BABN, the $2 note was the second in the new series and features a portrait of the Queen engraved by Henry S. Doubtfire of De La Rue, based on a photograph by Anthony Buckley. A small engraved vignette of the Parliament Buildings is adjacent to the portrait. The coat of arms on the face of each note in the series was also engraved. The back features two robins. Note the bar codes adjacent to the serial numbers on the reverse

The face of the $5 note features a portrait of Sir Wilfrid Laurier engraved by Yves Baril. Beside the portrait is the Centre Block of the Parliament Buildings as it appeared in Laurier's day. The flag on the tower is the Red Ensign, which would have flown at that time. Because many Canadians born after 1965 were unfamiliar with the Red Ensign some assumed that the flag on the new note was American, precipitating what was known as the flag flap. The bird featured on the back of the note is the belted kingfisher, depicted against a landscape typical of its habitat. The $5 note was the first in the series, issued in April 1986 and initially printed by CBN.

Printed by BABN and issued in June 1989, the $10 note features a portrait of Sir John A. Macdonald engraved by Thomas Hipschen of the U.S. Bureau of Engraving and Printing. The parliamentary vignette depicts the buildings in Macdonald's era, again with the Red Ensign flying. The back of the note features an osprey in flight.

The face of the $20 note features the Doubtfire engraving of the Queen that appears on the $2 note, but the adjacent vignette spotlights the Library of Parliament. A pair of common loons is depicted on the back of the note. Plans to put the loon on the $1 note were put on hold when the decision was made to replace the notes with the $1 coin, and it was later decided to use the image here. The note was issued in June 1993 and was printed by both CBN and BABN.

The $50 note issued in December 1989 was the first in the series to carry the cuttingedge OSD on its face. The note also features a portrait of William Lyon Mackenzie King engraved by Thomas Hipschen and a vignette of the Parliament Buildings with the Red Ensign flying. The back features an illustration of a snowy owl. For security reasons, the dominant colour hue on this denomination was changed from an orange-red to a blue-red. The note was printed by CBN.

The second note to feature the OSD was the $100 note, printed by BABN and issued in December 1990. The portrait of Sir Robert Borden, Prime Minister from 1911 to 1920, that appears on the face was engraved by Yves Baril. The parliamentary vignette shows the Centre Block with the Union Jack flying from the Peace Tower. The Union Jack was flown from federal buildings from 1904 until 1945 when an Order-in-Council authorized the use of a new Red Ensign carrying the shield from the Canadian coat of arms. The back of the note features the Canada goose

Issued in May 1992, the $1,000 note was originally going to feature the spruce grouse on the back. In the end, however, this was considered too controversial because of the bird's nickname fool hen, which derives from its habit of remaining motionless to avoid predators rather than fleeing. It was replaced by the pine grosbeak. The note's face features the Queen's portrait. On her left is a view of the Parliament Buildings, showing the north side of the Centre Block with the Library of Parliament in the foreground. The Maple Leaf flag flies above the Peace Tower. The note was printed by CBN. 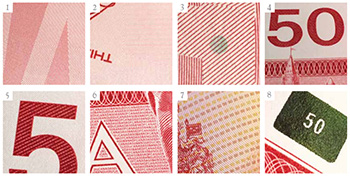 The word Canada in the stylized sky on the back of the notes was composed of multidirectional parallel lines (1) designed to obstruct counterfeiters by creating wavy patterns in photocopies. Multidirectional lines at the note edges (2) appear as solid blocks of pale colour. Notes also featured planchettes (3) and intaglio print (4, 5). The central panel of the note face consisted of microprint (6), such as BANK OF CANADA 50 BANQUE DU CANADA, while wavy lines in the background were actually rows of microprinted numerals (7) corresponding to the denomination. High-denomination notes carried an optical security device (8).