You are: Home » Banknotes » Articles » The Canadian Journey Series 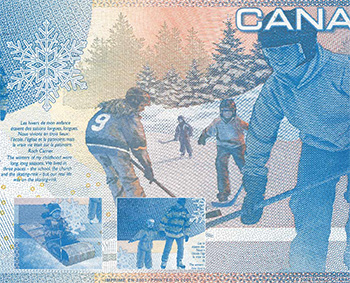 Research for a new note series was under way by 1997. As high-resolution colour copiers, inkjet printers, and computer scanners became more affordable, the potential for counterfeiting intensified. With the goal of having a new design ready by 2000, a process that usually takes six years was collapsed into three. What emerged was the most distinctly Canadian series of notes ever produced by the Bank.

The series was a departure not only in its design, but in the development process itself. The Bank worked closely with the Department of Finance to obtain their input on themes for the new series. And, for the first time, the Bank consulted Canadians. Through focus groups and telephone surveys, more than 4,000 Canadians from all walks of life gave their views on what should appear on the new notes. This included children from elementary schools across Canada who sent in their interpretations of the themes chosen. Although the images on the notes would change, the dominant colours for each denomination would be retained, as would the portraits featured. Consideration was given to replacing the portraits of the Queen and the prime ministers with those of famous Canadian inventors and artists, but Prime Minister Jean Chrétien opted to retain them. 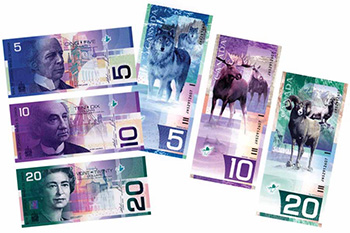 Models for the new notes proposed by a design team from CBN and BABN in 1998. The type style, enlarged portraits, and parliamentary vignettes on the faces are very similar to those used in the final design, but the vertical signature lines and numerals tie in to an early design for the backs, which featured an innovative vertical image. National Currency Collection

The criteria established for the themes of the notes required that they reflect fundamental values recognized and cherished across the country; highlight Canadian culture and diversity; demonstrate Canadian achievements; and lend themselves to artistic interpretation. Most importantly, the new notes had to balance these themes with the security concerns of the Bank. The final themes chosen were Children at Play ($5), Remembrance and Peacekeeping ($10), Arts and Culture ($20), Nation Building ($50), and Exploration and Innovation ($100).

The actual design of the notes rested with Jorge Peral, Art Director of CBN. His team used computer imaging that allowed many options to be evaluated immediately. Models were then created and reviewed by focus groups. 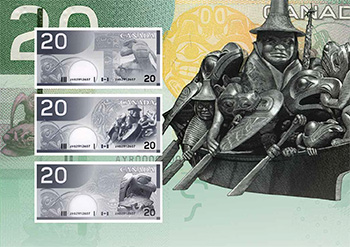 Born in Texcoco, Mexico, in 1955, Jorge Peral was working as a commercial artist in his father's studio by the age of 14. He studied painting, graphic design, and engraving, and received a degree from the Academy of San Carlos at the National Autonomous University of México. After winning a scholarship from the Banco de México in 1978, he spent three years studying security engraving and design in Italy and Switzerland. During a 17-year career at the Banco de México, Peral designed and engraved notes for Mexico and other Latin American countries. He has also designed awardwinning coins. In 1995, he immigrated to Canada and joined the Canadian Bank Note Company as Art Director. He designed all the notes in the Canadian Journey series, as well as engraving the portrait of Macdonald on the $10 note and that of the Queen on the $20 note.

The first note in the series, the $10 note, was issued in 2001. It was followed by the $5 note in 2002. Both contained familiar security features, such as intaglio and microprinting, together with new features such as iridescent maple leaves that changed from a matte to a shiny gold when the note was tilted, and a number that appeared only when the note was viewed at eye level. These notes also contained features that could be seen only under ultraviolet light. The venerable green planchettes, which had been a security feature on Canadian notes since the early twentieth century, were discontinued in favour of visible and fluorescent fibres in the paper. 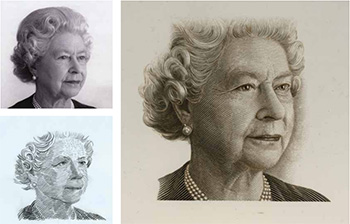 Engraving of the Queen by Jorge Peral from a photo by Charles Green, together with intermediate line drawing. The $20 note was named Bank Note of the Year for 2005 by the International Bank Note Society. The title is awarded to a note issued in the preceding year and judged on its artistic merit, design, and security features.

The announcement of the award stated that the portrait used on the... note is probably the finest portrait of the mature monarch to appear on any bank note. It also noted that the note was chosen from the ten entries for its well-balanced design, strong images, and advanced security features.

To improve the ability of the blind and visually impaired to recognize different denominations, the new notes included a tactile feature developed by CBN, consisting of a pattern of raised dots that varied from one denomination to another. Large, high-contrast numerals identifying the denomination were also used, and the electronic bank note reader was upgraded for the introduction of the new notes.

Initial plans were for the new series to be printed on an innovative Canadian substrate that was being developed by Domtar. Made of polymer and cotton, it seemed to offer a secure and durable alternative to watermarked paper, the international standard in bank note security. By the end of 2002, however, it became clear that the new product could not be produced reliably in time to address the growing counterfeiting threat to notes in the Birds series. The Bank therefore decided to use watermarked paper, containing a windowed metallic thread, as the substrate for the new highdenomination notes. Since no Canadian company was able to produce such paper, the Bank tendered on the international market for the first time.

The $20, $50, and $100 notes were issued in 2004. These higherdenomination notes contained four new security features to combat counterfeiting: a metallic holographic stripe, a watermark, a windowed thread (employing the colour-shifting technology of the OSD in a new form), and a see-through number. The notes also contained invisible but machinereadable features for both security and note processing.

In May 2005, the Bank issued a $10 note that included the security features found on the higher-denomination notes. An enhanced $5 note was issued in November 2006.

The $5 note, issued in March 2002, was the second in the series. The face features a portrait of Sir Wilfrid Laurier produced by the noted Swedish engraver Czeslaw Slania and a vignette of the West Block of the Parliament Buildings. All notes in the series feature a stylized Maple Leaf flag in the top right-hand corner. The back of the note celebrates the theme Children at Play with images of children skating, tobogganing, and playing hockey. A quotation from The Hockey Sweater by Canadian author Roch Carrier is also featured. The enhanced $5 note, issued in November 2006, carries the same security features as the rest of the notes in the series.

The face of the $10 note features a portrait of Sir John A. Macdonald engraved by Jorge Peral and a vignette of the Library of Parliament. The theme Remembrance and Peacekeeping is illustrated on the back. A male veteran stands with a boy and a girl observing a cenotaph on Remembrance Day. In the background, a male master corporal from the Land Forces and a female officer from the Naval Forces keep watch. A female Air Force officer in a peacekeeping role appears in the centre of the note. Beside the poppies in the lower left corner are lines from Lieutenant Colonel John McCrae's poem, In Flanders Fields and its French adaptation, Au champ d'honneur, by Jean Pariseau. Issued in January 2001, this note was the first in the series. An enhanced $10 note that includes the same security features as the high-denomination notes in the series was issued in May 2005.

The $20 note, issued in September 2004, features a portrait of the Queen based on a photograph taken in 2000 by Charles Green specifically for this note. The engraving was done by Jorge Peral and appears next to an illustration of the entrance to the Centre Block of the Parliament Buildings. The theme of Arts and Culture is illustrated on the back by the artwork of Bill Reid, which was inspired by the Haida culture of Canada's northwest coast. Depicted from left to right are The Raven and the First Men, Haida Grizzly Bear, The Spirit of Haida Gwaii, and Mythic Messengers. The note also features a passage from La montagne secrète by Gabrielle Roy and its English translation by Harry Binsse.

Issued in November 2004, the $50 note features a portrait of Prime Minister Mackenzie King produced in Germany by Giesecke & Devrient (a security printer with subsidiaries around the world and parent company of BA International Inc.) using a computer-assisted engraving process. This was the first time such a process was used to engrave the portrait on a Canadian bank note, although elements of earlier notes in the series had been produced this way. The Peace Tower appears in the centre of the note. The back of the note illustrates the theme of Nation Building and features the accomplishments of women who campaigned for equal rights and social justice. Depicted is the statue of the Famous Five that can be seen on Parliament Hill and in Olympic Plaza in Calgary, Alberta, as well as the Thérèse Casgrain Volunteer Award medallion. The featured quotation is from the Universal Declaration of Human Rights, the first draft of which was written by New Brunswick's John Peters Humphrey.

The portrait of Sir Robert Borden on the $100 note was engraved by Czeslaw Slania, based on a watercolour by Jorge Peral. Beside the portrait is a depiction of the entrance to the East Block of the Parliament Buildings. On the back of the note, the theme of Exploration and Innovation is illustrated with images of achievements in cartography and communications. A 1632 map created by Samuel de Champlain is paired with a birchbark canoe, and a satellite image of Canada lies between a telecommunications antenna and a Radarsat-1 satellite. Also featured are a quotation from Miriam Waddington's poem, Jacques Cartier in Toronto and its French translation by Christine Klein-Lataud. This note was issued in March 2004.