You are: Home » Banknotes » Articles » The First Bilingual Series: 1937

The creation of a second series of bank notes, only two years after the first, was prompted by changes in federal legislation that required the Bank of Canada to produce bilingual bank notes. This amendment to the Bank of Canada Act prompted bitter debate in Canada's House of Commons, but the production of bilingual notes was widely endorsed by parliamentarians and by the public.

Another factor behind the new note issue was the death of King George V on 20 January 1936. Following King George's death, the Bank began preparations for new notes bearing the portrait of the new King, Edward VIII. Edward's historic abdication on 11 December 1936 delayed the issue while new designs were hastily prepared.

In the 1937 series, the portrait of King George VI replaced those of other members of the royal family on all denominations except the $100 and $1,000 notes, which featured former Canadian prime ministers. The portrait of the new King, engraved by artists at the Canadian Bank Note Company, was the same one that appeared on the 1935 series $50 note.

The colours of the 1937 note series set the pattern for the colours that have been used on every subsequent series. Since the blues and greens used for the $1 and $2 notes in the previous series looked similar in low light, the Bank decided to print the 1937 $2 notes in a terracotta red. The colour of the $5 note was also changed, from orange to the now-familiar blue. To avoid confusion with the $2 notes in the 1935 series, which were also blue, the Bank recalled and cancelled 3,644,000 of the older $2 notes.

The location of the portrait on the face of the note also changed in the 1937 series, moving to the centre. The move accommodated the new bilingual English and French text and also solved the problem of cash handlers soiling the royal portraits when they were counting notes. Many of the classical elements of the design were retained, together with most of the allegorical figures appearing on the backs of the notes. 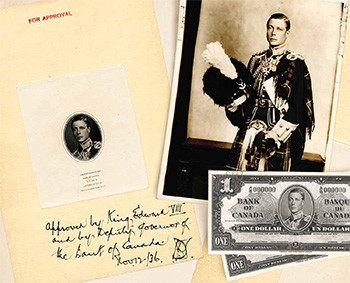 Harry Dawson was appointed Superintendent, and later Chief, of the Engraving Division of the Bureau of Engraving and Printing in Washington, D.C. in 1924. In this capacity, he prepared a variety of material, including images for stamps, foreign bank notes, and corporate bonds. He also worked for BABN in Ottawa, producing portraits and vignettes for several Bank of Canada note issues. These included the portraits of Queen Mary and Prince Edward, as well as the allegorical figures on the 1935 issue $5 and $10 notes; the vignettes on the backs of the $2 and $5 notes of 1937; and the scenic vignette of Richmond, Quebec on the back of the 1954 issue $2 note.

Although at first glance the similarity in the ornate design of both the 1935 and 1937 series of notes is striking, closer examination reveals significant changes in the 1937 series. The overall design of the notes is much more uniform and consistent from one denomination to another. The face of each denomination features upright numerals in the upper left- and right-hand corners and the written denomination in English and French in the lower left- and right-hand corners respectively. A pattern of rays underlies each central portrait, varying only in colour among denominations. The backs of the notes are also more uniform. The allegorical figures appear in frames of the same shape, with large numerals on either side and tilted numerals in each corner, as well as a small number in the centre at the bottom of each note. The placement of the text on the backs is also the same for each denomination.

The $1,000 note was issued several years after the rest of the 1937 series, mainly because it was rarely used by members of the public, and there were sufficient quantities in circulation from the 1935 issue to meet the needs of the chartered banks.

The face of the $1 note was modified in 1938 to increase the width of the panel in which the signatures appeared by 2.4 mm, to counter earlier printing problems. All the dies, rolls, and plates used to produce the original version were destroyed by CBN. The allegorical figure of agriculture on the back of the note is the same as that on the back of the 1935 $1 note.

The $2 note was printed by BABN in a new terracotta shade called sanguine. The back of the note carries the harvest allegory found on the back of the $10 note in the 1935 series and was engraved by Harry Dawson.

The $5 note, printed by BABN, features the same image of electric power that appears on the back of the 1935 $5 note, but is blue rather than orange.

Also printed by BABN, the back of the purple $10 note features the allegorical image from the 1935 $2 note, a winged Mercury representing transportation.

Printed by CBN, the $20 note features a portrait of 8-year-old Princess Elizabeth (granddaughter of King George V and later Queen Elizabeth II). The engraving for the note, completed by Edwin Gunn of ABN, was based on a Marcus Adams photograph of the princess. The image on the back, based on a painting by Alonzo Foringer, shows two allegorical figures representing toil.

The colour of the $50 note was changed from brown to orange, and the back features the same allegorical figure representing modern inventions that appears on the 1935 $50 note. This note was also produced by CBN.

The $1,000 note was issued several years after the rest of the 1937 series. It took on the rose tint of the 1935 $20 note but retained the portrait of Sir Wilfrid Laurier, Canada's first French-Canadian prime minister, as well as the security allegory on the back. 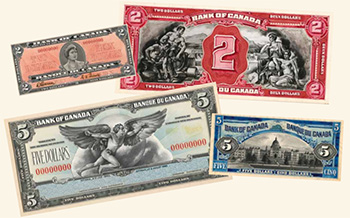 An early memo indicates that Deputy Governor Donald Gordon favoured the introduction of a new note issue every five years to obstruct any attempt at wholesale counterfeiting. These models were among those submitted for a possible 1940 issue. With the outbreak of World War II, such an expense was likely deemed unwarranted.

The model for the $2 note features Queen Elizabeth The Queen Mother on the face and a grouping of allegorical figures (representing hydro power, the key to industry) on the back. The face of the $5 note carries the unlikely figure of Icarus, while the BC Legislature in Victoria appears on the back.