The Scenes of Canada Series: 1969-1979 - Articles on canadian banknotes - Coins and Canada 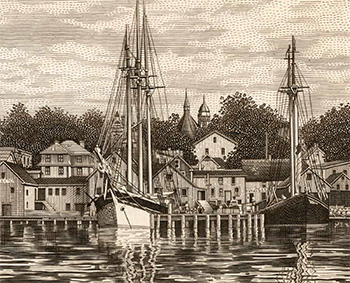 Development of a new series of notes began in earnest during 1963 and 1964 with the goal of producing notes that would be more secure in the face of the advancements in reproduction techniques available to counterfeiters. Both British American Bank Note and Canadian Bank Note were involved in the early concepts. But for the first time, the Bank went outside Canada for design input, contacting Thomas De La Rue, a world-renowned British securityprinting firm. By July 1964, the Bank had decided to adopt the design submitted by De La Rue as a basis for further development, with assistance from the Canadian printers.

The Scenes of Canada series of bank notes, introduced between 1969 and 1979, was a complete departure from earlier issues. The main characteristic of the new notes was the use of multicoloured tints beneath the dominant colour, prompting Bank staff to refer to the issue as the multicoloured series. Bemused Canadians had other names for the colourful new notes. When the new $20 note was introduced in June 1970, one shopper described it as a British pound note gone psychedelic. Some merchants refused to believe that the rainbow money was real currency.

Other innovations included colourful, wavy patterns and the reintroduction of portraits of Canadian prime ministers on some denominations. The Queen's portrait was originally slated to appear on all notes in the new series, but Edgar Benson, the Minister of Finance, asked that the new bank notes include portraits of former Canadian prime ministers to reflect Canada's burgeoning national identity. 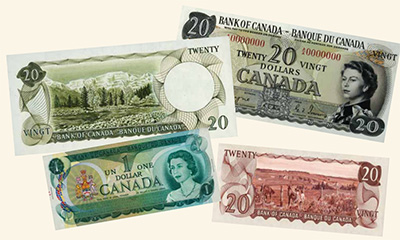 (Top left and right) Between 1963 and 1966, many models of the $20 note were reworked, as the initial designs for the new note issue were developed. This model, submitted by De La Rue, laid the design groundwork for the new notes. Its curvilinear vertical borders, featuring multicoloured diamonds, together with its sweeping guilloche patterns and twocircle layout for the note's face, were used in the final design, but the circular watermark on the back was not. (Below left) Most of the green areas in this first model for the front of the $1 note were changed to black in the actual note because of concerns that it would be confused with the new $20 note. (Below right) This proposal for the back of the $2 note was quickly put together using the back of the $20 note–the first note of the series issued– as a template.

The words this note is legal tender replaced the phrase will pay to the bearer on demand, reflecting the fact that Canada's currency had long ceased to be redeemable in gold. The $1,000 denomination was not included in this issue, likely because of the low volume of $1,000 notes in circulation. Governor Rasminsky broached the idea of dropping the denomination altogether, but the Minister of Finance did not agree.

The scenic vignettes chosen for the series introduced an element of human activity, including fishing, shipping, industry, and logging. But the most popular note of the series was the 1975 $50 note, which featured a formation from the RCMP musical ride. Sterling Suggett, a scientific adviser, researcher, and note designer at the Bank, suggested the image to recognize the 1973 centennial of the RCMP. At the same time, the Bank discontinued the use of the heavy metals required to make ink in the traditional brilliant orange tint of the $50 note, and the colour was changed to a dark red.

C. Gordon Yorke was born in Shellbrook, Saskatchewan, in 1917. Like his colleague, George Gunderson, he studied at the Ontario College of Art, and in 1935, he applied for work at the British American Bank Note Company where he trained under Harry P. Dawson. Yorke was a prolific engraver, producing images for various security documents. The forest stream pictured on the back of the $5 note in the 1954 series was his first engraving for a bank note. He played a particularly prominent role in the 1969–79 issue, engraving two portraits (Laurier and Borden) and four vignettes (logging scene, Ottawa River; Inuit hunting scene; salmon seiner, Johnstone Strait; and Lunenburg Harbour). Upon Yorke's death in 1980, James Haxby (Assistant Curator of the National Currency Collection) wrote an obituary for the Canadian Paper Money Journal, describing Yorke as a sensitive, thoughtful person who was neither arrogant nor aloof despite his formidable talents.

Production of the new multicoloured notes required the printers to buy new equipment and to use innovative processes that made the notes more difficult to counterfeit. The faces of the notes were printed using one intaglio plate and three lithographic plates. The backs of all denominations (except the $50) were initially printed using a combination of two lithographic and one intaglio plate. Beginning in 1984, the backs of the $1 to $20 denominations were printed using an all-lithography process. To improve security, blue and red serial numbers replaced the monochrome red numbers of former series. Other minor changes to the design and printing were initiated in 1977 to allow the processing of notes by machine. The various denominations in the 1969–79 series were not issued at the same time, but over the decade. The dates on the notes indicated the year in which the original intaglio plate for each denomination was produced, rather than the year of issue. 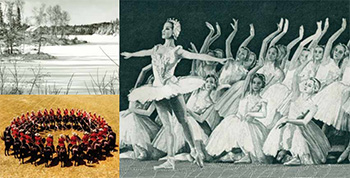 The vignette originally proposed for the back of the new $50 note featured a frozen lake near Sudbury, Ontario. The note's traditional orange colour was felt to be too limited in tonal range, a problem from both an artistic and anti-counterfeiting perspective. It was decided to change the colour to slate grey and to use the image originally proposed for the back of the $1,000 note–a scene from Swan Lake performed by the National Ballet of Canada. Not only would this recognize the importance of the arts in Canada, but, as one Bank official noted, the subject is perfectly proportioned for the space and provides an opportunity for truly virtuoso engraving. Gunderson prepared an engraved proof but was still unhappy with the colour, recommending a shade between orchid and claret. With this change, the suggestion was made to commemorate the anniversary of the RCMP, and one of the Bank's most popular notes was born. The photo of the musical ride was taken by RCMP photographer Donald K. Guerrette.

The $1 note was issued in June 1974 and printed by both CBN and BABN. The back features a tugboat in the middle of a broken log boom on the Ottawa River below Parliament Hill. The vignette was based on a 1963 photograph by Malak and was engraved by C. Gordon Yorke. The tugboat, the Missinaibi hauled logs up the river for almost twenty years. It was purchased by the City of Hull in 1984 and now sits on the site from which the photograph that made it famous was taken: beside the Ottawa River behind the Canadian Museum of Civilization. This was the last $1 note issued by the Bank. With the introduction of the $1 coin in 1987, the issuing of $1 notes ended in 1989.

Issued in August 1975 and printed by BABN, the $2 note features an Inuit hunting scene based on a photo taken by Doug Wilkinson at Pond Inlet on North Baffin Island. Engraved by C. Gordon Yorke, the vignette was originally intended for the back of the $100 note.

The $5 note was issued in December 1972. The portrait of Sir Wilfrid Laurier on the face of the note was engraved by C. Gordon Yorke, while the vignette on the back was engraved by George Gunderson and deepened by Yorke. Based on a photograph by George Hunter, the image features a salmon seiner in Johnstone Strait, northeast of Vancouver Island. The note was printed by CBN.

In 1979, the $5 note was reissued with the serial numbers moved to the back of the notes. A small change was also made to the guilloche pattern at the centre top of the face of the $5 note to make the numeral more distinct.

A portrait of Sir John A. Macdonald engraved by George Gunderson appears on the front of the $10 note. The back features the Polymer Corporation in Sarnia, Ontario. The image was engraved by De La Rue based on a photograph by George Hunter. A Bank memo states that the Polymer plant was chosen because, unlike most industries carried on in buildings of massive simplicity, it provided detail ideally suited to engraving and, as a profitable and innovative Crown Corporation, had achieved a world-wide reputation. The note was printed by CBN and issued in November 1971.

The first $20 note in the series was issued in June 1970 and was printed by both CBN and BABN. The face features the Gunderson engraving of the Queen, while the back shows a view of Moraine Lake in Alberta's Valley of the Ten Peaks, based on a photo from the Canadian Pacific Railway collection. The original engraving by De La Rue was replaced with one prepared by BABN, because the mountains in the first did not seem authentic. The problem was attributed to the poor quality of the original photograph.

In 1979, the $20 note was reissued with the serial numbers moved to the back of the notes. The Bank took this opportunity to modify the colours of the $20 note to further differentiate it from the $1 note. A small change was also made to the motif at the centre top of the face to make the numeral more distinct.

The face of the $50 note features an engraving of William Lyon Mackenzie King by George Gunderson based on a Karsh portrait of Canada's longest-serving prime minister. The dome formation from the RCMP musical ride appears on the back of the note. This is the only denomination in the series where the vignette on the back was produced by a lithographic rather than an intaglio process. The note was issued in March 1975 and printed by CBN.

C. Gordon Yorke engraved the portrait of Prime Minister Sir Robert Borden that appears on the front of the $100 note, as well as the vignette of the harbour at Lunenburg, Nova Scotia, featured on the back. The engraving was based on a photo by G. Hedley Doty, a photographer with the Nova Scotia Information Service. Issued in May 1976, the note was printed by BABN.