On January 9, 2020, Bank of Canada governor Stephen Poloz says the central bank is working on plans for a new 5-dollars banknote. The consultations are similar to those that led to the choice of Viola Desmond for the 10-dollars banknote. Once the new portrait subject has been selected, the bank note design process will begin. All we know right now is that it will be a polymer note with a vertical design.

Finance Minister Bill Morneau and Bank of Canada Governor Stephen Poloz announced in December, 2016, that the businesswoman turned civil libertarian will become one of the few Canadian women to be celebrated on the face of her country's currency. Ms. Desmond built a business as a beautician and, through her beauty school, was a mentor to young black women in Nova Scotia.

Viola Desmond remains an icon of the human rights and freedoms movement in Canada. A successful Nova Scotia businesswoman, she defiantly refused to leave a whites-only area of a movie theatre in 1946 and was subsequently jailed, convicted and fined. Her court case was one of the first known legal challenges against racial segregation brought forth by a Black woman in Canada.

On January 9, 2020, Bank of Canada governor Stephen Poloz says the central bank is working on plans for a new 5-dollars banknote. 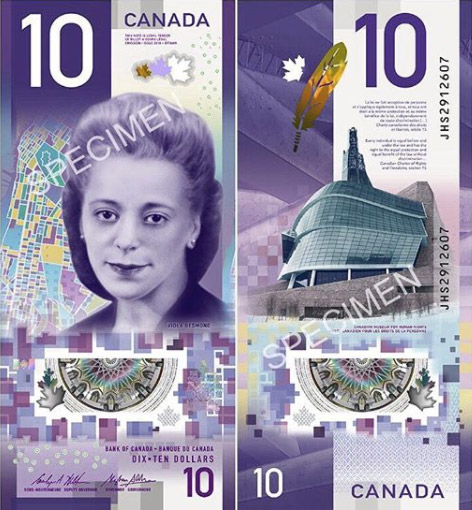