You are: Home » Banknotes » Signatures » B. Bonin

The Board of Directors of the Bank of Canada announced on May 27, 1999, that, Malcolm Knight has been appointed Senior Deputy Governor of the Bank for a 7 years term, effective 5 July 1999.

The former Senior Deputy Governor, Bernard Bonin, retired on 21 May 1999. Bank of Canada thanked him for the role he has played in restructuring the Bank and in making it a more transparent institution. 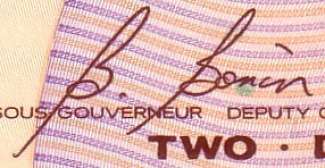 B. Bonin signature on canadian banknotes

B. Bonin appears on the following banknotes: