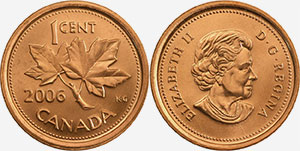 Due to the rising price of copper, the Royal Canadian Mint started to change the composition of Canadian 1-cent coins. In 1999 and 2000, several coins were issued, mostly in sets, for testing in vending machines.

From a copper to steel, a new production method, called multi-ply plating, combined with the new composition, were use for Canadian coinage, and for several foreign coins: Papua New Guinea, New Zealand, Ghana, Oman, Paraguay, Barbados, Bahamas and more.

In an age of rising base metal costs, there is a compelling need around the world for a coinage solution which saves money without compromising quality. Only the Royal Canadian Mint can offer a solution to meet this need, which has led us to become one of the most innovative in the world.

Multi-ply plating is an electroplating process which deposits thin, alternating layers of nickel and copper over a steel core. Advantages are:

From 2001 to 2006, a P was added, below the Queen's bust, for coins produced with the new plating method. During the year 2006, the P was replaced by the Royal Canadian Mint logo.

No P No Logo

For some unknown reason, copper and steel planchets were mixed up in 2006 and 6 major varieties of this coin are known.