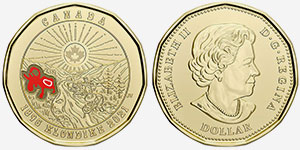 Royal Canadian Mint announced this week a circulating $1 coin that commemorates the 125th anniversary of the Klondike Gold Rush. The moment is captured on the $1 coin that is twice featured here–as a struck version, and as a selectively coloured one.

Reverse design by Jori van der Linde is also a remainder that there is a more complete story to tell: one that speaks to the impact on the Indigenous people who have inhabited the land for millennia. Their displacement, the disruption of their culture and traditional ways of life and the damage on the environment are also legacies of the last great gold rush, as is the resilience of the Yukon First Nations who are reclaiming their traditional territory and who remain strong stewards and leaders in the Yukon today.

The Mint is thankful to the Tr'ondëk Hwëch'in and Carcross/Tagish First Nations, as well as the Dawson City Museum for helping us tell a complete, shared story of the Klondike Gold Rush. As this new coin circulates from coast to coast to coast, we hope that the social and environmental impacts of the Klondike discovery will become as well understood as its role developing the Yukon and transforming the Canadian economy.

- Marie Lemay, President and CEO of the Royal Canadian Mint

The reverse of the one-dollar circulation coin commemorating the 125th anniversary of the Klondike gold discovery also depicts the four people credited with the discovery of gold on Rabbit Creek that started the Klondike Gold Rush in August 1896: Keish (Skookum Jim Mason), K?áa Goox? (Dawson Charlie), Shaaw Tláa (Kate Carmack) and her husband, George Carmack. On a hillside appears an image representing the Moosehide Gathering place, where the Tr'ondëk Hwëch'in First Nation relocated when it was displaced by the influx of gold rushers. It has become a critical symbol representing the community's experience. The word KLONDIKE and the dates 1896 and 2021 also accompany the design.

In all, two million coloured versions and one million uncoloured versions of the coin will begin circulating as of today. Coloured coins will show the Moosehide Gathering place icon in red. The obverse features the effigy of Her Majesty Queen Elizabeth II, designed by Canadian artist Susanna Blunt in 2003.

Chief Isaac was the leader of the Tr'ondëk Hwëch'in during the Klondike Gold Rush and in the years that followed. During the early years following the Klondike Gold Rush, Chief Isaac understood that the changes brought by newcomers would have a great impact on his people's lives and culture. In an act of foresight, he cached many of the community's traditional songs and dances, sharing them with Alaskan neighbours.

An iconic drum, seen held by Chief Isaac in historical photos, featured a moose-shaped symbol of Ëdhä Dädhëch? (Moosehide Slide), which has been re-created on this piece and the commemorative $1 circulation coin. It is an important icon of perseverance and cultural revitalization, one that represents the inherent belonging of the Tr'ondëk Hwëch'in to the land.