In 1927 the Dominion authorities requested that the Royal Mint in London prepare new reverse dies for Canada's gold coinage. A new coat of arms had been approved for the Dominion in 1921, and it was felt that if, in the future, Canada should decide to issue another series of gold coins, everything would be in readiness. Previously, the only issue of five- and ten-dollar gold pieces had been struck between 1912 and 1914. Since the central motif of the new coat of arms was designed to reflect the four founding nationalities of Canada, the upper section of the shield was quartered to display the heraldic devices of France, England, Scotland, and Ireland, while the lower third of the shield shows the maple leaf, the emblem of Canada.

The Royal Mint commissioned sculptor-designer George E. Kruger-Gray to produce models that would incorporate the new armorial bearings. Kruger-Gray prepared the beautiful design shown, and patterns were struck in bronze and dated 1928. The obverse of the 1928 pattern is identical to that used in the 1912-14 gold coinage. A new issue of gold coins never materialized, however, and only a very small number of these bronze patterns was produced. The piece illustrated here, which is slightly larger than a Canadian 25-cent coin and double the thickness, is part of the National Currency Collection, Bank of Canada. 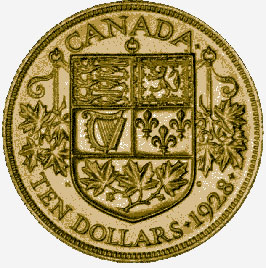