Very few gold coins have been struck in Canada, even though gold was widely used throughout the world as a medium of exchange until the early years of this century. Canada issued $5 and $10 gold pieces in 1912, 1913 and 1914 and British sovereigns were struck at The Royal Mint in Ottawa from 1908 to 1919. A special issue of Canadian coins, including a $20 gold piece, was produced in 1967 to mark the centennial of Confederation. Although these handsome gold coins are legal tender, they were not put into circulation but were made available only as part of cased sets of coins sold by the Mint direct to the Canadian public. The specimen illustrated is in the National Currency Collection, Bank of Canada. 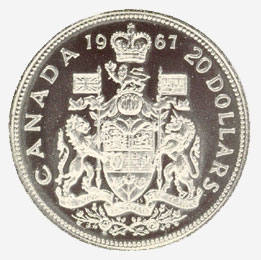