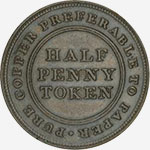 People seek to acquire money not for itself but to exchange it for desired goods and services, now or in the future. Consequently, they must be confident that the object being used as money is widely accepted by others and that it will retain its purchasing power over time. While having more money can benefit an individual, too much money in circulation relative to the supply of goods and services will lead to rising prices inflation. Conversely, too little money in circulation will lead to falling prices deflation. Both persistent inflation and persistent deflation can undermine the effective functioning of the economy, leading, in some cases, to considerable financial hardship.

Civilizations have experienced many inflationary episodes throughout history. During the last centuries of the Roman Empire, successive emperors increased the money supply by progressively reducing the silver content of coins in an attempt to finance the cost of wars and imperial excesses. This led to rampant inflation and economic chaos. Cashstrapped medieval monarchs also debased their coinage.

During the 17th century, Spain and, to a lesser extent, the rest of Europe experienced persistent inflation owing to an influx of precious metals from Central and South America. To the puzzlement of many, increased stocks of gold and silver did not bring increased prosperity.

Money shortages have also occurred from time to time, leading to innovative solutions. Paper money was initially issued by the colonial authorities in New France during the 17th century as a temporary measure to relieve a coin shortage.

Sometimes, coins were cut up to make small change. In other cases, substitutes appeared. During the 18th and 19th centuries, copper tokens issued by banks and merchants circulated freely in Canada, alongside various foreign coins and private issues of paper scrip.

During the Great Depression, many Canadian municipalities introduced low-value notes redeemable for food, fuel, or shelter in an attempt to help the poor and destitute.

Coin shortages still occur from time to time when the metal value of coins exceeds their face value, inducing people to withdraw coins from circulation and melt them down. While a source of inconvenience for merchants and customers, such shortages do not usually constitute a major monetary problem and are usually quickly rectified by coin-issuing authorities.

The invention of paper money offered new scope for monetary abuse and inflation. Initially, paper money was accepted because issuers (private banks and governments) committed to the conversion of their notes into gold on demand. But during times of financial stress, this commitment was sometimes withdrawn, leading to the over issuance of currency and subsequent inflation.

During the 19th century, phantom banks in North America circulated worthless notes to the unsuspecting. Established in remote areas or at a distance from the circulating notes to deter note holders from redeeming notes for gold, such banks were backed by little or no capital.

In the 20th century, the adoption of pure fiat currencies eliminated any external constraint on the creation of money. In the absence of strict controls, many countries experienced hyperinflation, characterized by a rapid decline in the purchasing power of money, with severe economic and social consequences. Today, the purchasing power of money is protected in most countries by independent government-established central banks with a mandate to achieve and maintain price stability.

Widespread counterfeiting and other monetary abuses can also impair confidence in money. The private abuse of money has been a problem throughout history, despite significant penalties for tampering with currency. Gold and silver coins were often clipped or sweated the practice of removing a small amount of metal by abrasion or chemical means. Paper money was, and continues to be, forged, requiring issuers to develop increasingly sophisticated anti-counterfeiting devices to protect their bank notes from duplication, and to retain society's confidence in money.