The Province of Canada, which existed as a political entity from 1841 to 1867 and consisted of what are now Ontario and Quebec, was the first part of British North America to adopt the familiar decimal system of currency by an act passed in 1857. The decision to adopt a decimal system was made on the basis of the increasing trade between British North America and the United States as well as the presence in Canada of the Spanish-American 'dollar' (eight- real piece) and U.S. coins. Canada's new decimal coins consisted of bronze cents dated 1858 and 1859 and five-, ten- and twenty-cent silver pieces dated 1858. 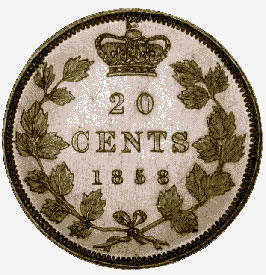