The Sinews of War - Articles on canadian coins - Coins and Canada

You are: Home » Canadian coins » Articles » The Sinews of War

The Sinews of War 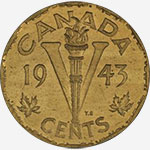 War exacts a terrible toll on society. Along with untold human suffering and loss of life, the economic cost in terms of damaged property and lost opportunities can be incalculable, even for the victor. When a society calls up its soldiers, it also mobilizes its economy, with resources diverted from peacetime to wartime production. To finance this transformation and the costs of waging war, a country's monetary and financial system is brought into play. Governments raise taxes and sell bonds to the public, appealing to patriotism and offering financial incentives. The Roman statesman Cicero called money the sinews of war.

During ancient and medieval times, rulers sometimes debased their coinage, or reduced the weight of coins, to help finance wartime expenditures. Similarly, during modern times, governments have printed money. In both cases, the result was inflation. Wage and price controls, along with rationing, were often imposed to temporarily moderate rising prices.

War can also directly affect the money in circulation. During the time of the gold standard, it was common for embattled countries to suspend the convertibility of bank notes into gold to conserve the precious metals needed to fund important war-related imports. In an application of Gresham's Law - bad money drives out good - gold and silver coins rapidly disappeared from circulation, replaced by paper currency.

With copper and nickel being critical ingredients in the manufacture of armaments, national mints made emergency coins from cheaper, less-desirable metals, such as aluminum, bronze, iron, and zinc. Alternatively, small-denomination bank notes were circulated.

During wartime, military authorities often issue special currency to pay their armed forces. Such army issues are typically used in foreign theatres of operation and are not legal tender in the home country. Since small change is often in short supply, vouchers and tokens also circulate widely on army bases.

In prisoner-of-war (POW) and internment camps, inmates were denied access to local currency to discourage escape. Economic life consequently centred on coupons, or scrip issued by camp authorities and accepted by camp canteens.

Cigarettes were famously used as currency by Allied servicemen in German prison camps. Portable, divisible, difficult to counterfeit, and limited in supply, cigarettes constituted an effective commodity currency. Market economies developed in the camps, with prices of goods and services posted in terms of cigarettes, with trade helping to narrow price differences between barracks.

During both world wars, occupying powers issued special notes and coins for circulation in captured territory to help establish their economic control. Liberation currency was printed by exiled governments for circulation once liberation operations had commenced. In postwar occupied Germany, barter units, special Allied military notes, circulated alongside cigarettes as money before currency reform led to the birth of the deutschmark in 1948.