A coin dealer picks out under-performers with potential

Let's get this straight. This is an article for coin collectors, not for coin speculators. It's about the Canadian coins I believe are sleepers for the prices that are presently being charged. I'm not suggesting that you should run out and purchase any of the coins that I've listed below. Just because I think the following coins are undervalued, doesn't mean you should follow my advice. Decide for yourselves.

As a coin dealer, I'm always on the lookout for these sleeper coins.

I think this is without a doubt the most difficult coin to acquire for your collection. It's much harder to find than a 1921 50-cent or an 1889 10-cent. It's almost as scarce as the 1911 pattern dollar which sold for $1 million. Yet it's a coin that's almost, unknown by many Canadian coin collectors. I've checked my coin auction catalogues, and one of these hasn't been at auction for a long time.

While 8,000 tombac 5-cent were minted in 1944, The Charlton Standard Catalogue of Canadian Coins notes:

Most of the 1944 5-cent tombac remained unissued and were melted [...] only one is known to exist.

This coin is so scarce, it isn't even listed in Trends section of this [Canadian Coin News] magazine. How scarce are they? I phoned Brian Cornwell at the International Coin Certification Service in Toronto to find out how many of these coins the company has certified. His answer was zero.

According to Charlton, the last time this coin was sold at auction was at the ANA sale in 1999 when it sold for U.S. $38,500. At the time, that might have seemed a high price to pay, but in my estimation, the rarity of this coin is such that it is worth many times that price. So if you ever have a chance to purchase this coin at auction or from a dealer or a private sale, you might want to thunk about buying it. It might be the only chance you have in your lifetime. Just make sure it has been authenticated by ICCS or another reputable grading service. (You don't want to purchase a regular 1944 5-cent that's been plated so it looks like a tombac.)

A slightly less rare coin than the 1944 tombac is the 1859 1-cent that was struck in brass instead of bronze. No one knows for sure how many of these were manufactured, but there are very few of them in existence. ICCS has only graded 13 of these yellow-coloured coins. All have only been in lower grades, ranging from G-4 to F-15. Examples of this rare variety in VF or higher grades are obviously very rare. Yet, Trends list the cost of a rare VG-8 at $4,000. I would gladly pay these prices for this rare coin. So if anyone has a certified example for sale, let me know.

I believe the 1946 design in 6 50-cent coin is another sleeper that's undervalued. It is a result of a damaged die. While the coin is certainly not rare, it definitely is hard to find, especially in Mint State. The ICCS Population Report 2001 records show that a total of 69 examples have been certified in grades ranging from VG-10 to AU-55.

But if you are looking for an example in Mint State, you will have to look long and hard to find one. ICCS reports they have only certified four examples in Mint State, and all four of them were graded MS-60. That means if you are able to locate an MS-62 example, you could have the highest graded example in existence.

I had an example that ICCS graded AU-55. Because the grading service has only certified six examples in AU-55, the coin I just sold is a top-10 condition census coin. Examples in VF-20 condition are currently selling for $60. To me, that's a bargain. 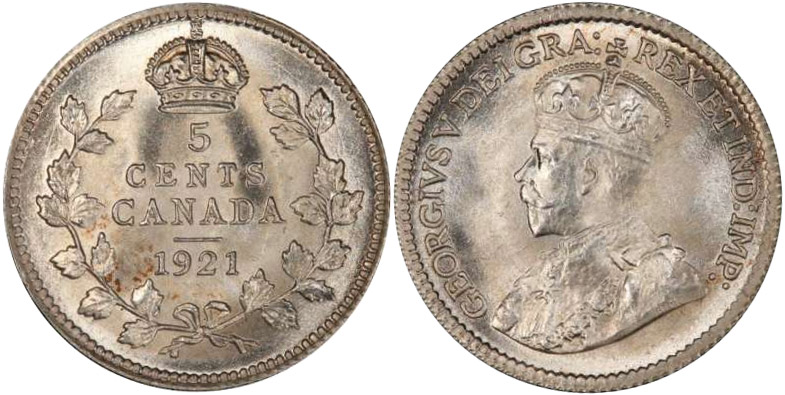 As you all know, when the Canadian government decided to switch from silver 5-cent coins to the much larger nickel version, almost all of the 2,582,495 silver 5-cent were melted. Only about 400 examples of this date are known to exist.

Since there are thousands of Canadian coin collections with silver 5-cent collections and only 400 examples available, I think the Prince of canadian coins is undervalued. ICCS has graded over 110 of these scarce coins in circulated grades, over a quarter of those known to exist.

While the coins are hard to find, they are easy to sell. Last year, I was fortunate to be able to purchase a nice example graded VG-8 by ICCS. The next day, I sold it to a customer for quite a bit above Trends price.

Not every coin on my sleeper list is expensive. In fact, this one is cheap. I know, most of you have probably got one of these coins. But I'm finding I have quite a few new collectors who want to purchase one for their collection but I am often sold out of them. While they made over 900,000 of these coins, in Mint State the Near 6 is almost as scarce as the much rare (and more expensive) Far 6 variety.

I'm not saying these coins will ever get to be high prices, but for a grand total of $3 for a VG-8, I don't think you will go wrong buying a few of these and socking them away for a while.

Over the last few years, growing numbers of coin collectors in Canada and the U.S. have been trying to collect a complete set of canadian large cents graded MS-63 Red or higher.

Because there are far fewer red large cents (particularly Victorian ones) available compared to the number of collectors who now want them for their collections, I think red large cents are important sleepers, not only for their beauty but also for their scarcity.

In fact, for some dates and varieties, you can count the number of red examples on one hand. While most dates and varieties have a fair number in MS-63 red condition, the number that are graded MS-64 or higher are particularly scarce. And as more and more serious collectors try to acquire red large cents for their collections, the demand will be much higher than the supply.

Last year saw a much needed increase in the Trends prices for George VI red small cents. But the small cents issued for George V are much harder to come by in red condition that those of George VI. While there are lots of 1936 George V cents graded MS-63 red or higher, the same cannot be saif of most of the other dates. In fact, more that 35 per cent of all the George V cents graded MS-63 are dated 1936. And in MS-64, the other dates are even more scarce. The majority of coins graded MS-64 are dated 1936, which means there are very few available from 1920 to 1935.

When I decided to write this article, I went through the ICCS Population Report to see how many coins they had graded MS-68. I was astonished at how few canadian business strike coins were graded that high. Zero large cents. Zero small cents. One silver 5-cent. Zero nickels. Zero 10-cent. Zero 50-cent. And zero silver dollars. It's obvious coins in this state of preservation are exceedingly rare.

For the last few years more and more collectors seem to be trying to get a complete set of Proof-Like quality sets that were issued in the 1950s. Those from 1960 to 1967 were made in quite large numbers, but those issued in the 1950s have low mintages. Only 1,200 sets were issued in 1953: some with the shoulder fold and others without the shoulder fold. The following year the Mint issued 3,000 sets. And by 1959, the mint issued 31,577 sets.

Some of these sets were melted when the silver market went crazy in the early 1980s, so the mintage figures are now out of date. And other sets have been broken up and are being sold as individual coins.

When I go to the coin shows I notice that the few coin dealers that have PL sets for sale from 1950s, often sell them for more than the Trends price. In my opinion 1950s PL sets in premium condition and with red cents are getting hard to find.

I admit it, I'm a sucker for these Specimen sets. The 1908 Specimen sets were struck to commemorate the opening of the Royal Canadian Mint. Charlton notes it was the first set of specimen coins offered to the general public for the princely sum of $2. While these beautiful Specimen coins were minted with a matte finish, what I really like about them is they mark an historical milestone: the beginning of minting coins in Canada. When the coins were issued they were available in a variety of cases with an inscription which noted the coins were the first coins minted in Canada.

Again, these Specimen sets are difficult to come by, as they only go on sale infrequently. And the set I purchased last year was sold the very next day,

The Royal Canadian Mint's 1999 and 2000 25-cent campaign has stimulated tens of thousands of canadians to collect coins for the first time in their lives. This brings a much needed shot in the arm to coin collecting in this country. And while it will take these new collectors years before a few of them get to the point where they want to purchase some of the coins on this list, their buying power will reduce the number of coins available for sale.

In the old days - For me that was the 1960s - it used to be possible to acquire a decent Canadian coin collection from pocket change. And what you couldn't find in your pocket or purse to stick in the old Whitman folders, you could purchase from your local coin dealer, often at far cheaper prices than today.

A lot has changed since then. Silver coins have disappeared from circulation, and much of it has been melted for its silver value. Even small cents and nickels from 1950s have been scooped up. Even more importantly, many of today's collectors are much more knowledgeable about the relative scarcity of key date and high grade coins than was the case even 10 or 15 years ago.

And as more and more Canadian coin collectors become serious collectors who want scarce and/or high grade coins for their collections, the demand for these sleepers will soon outstrip the supply.