When David Bergeron, curator of the Bank of Canada Museum, was asked this year which object he was most proud to handle and work with, he mentioned the 1936 Dot Specimen Set. 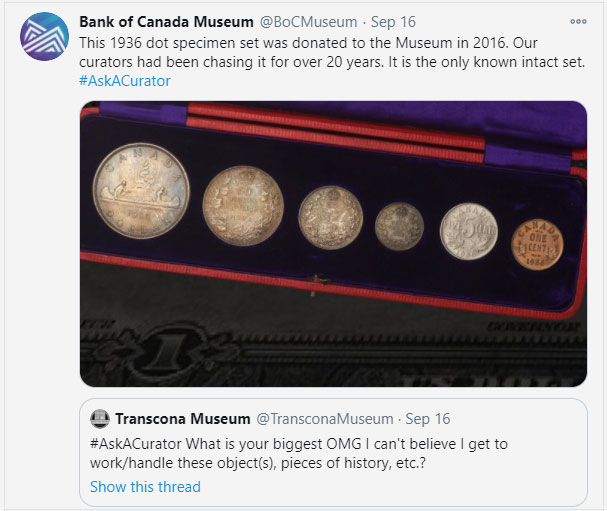 A similar set was assembled by Sid and Alicia Belzberg, but was broken up in 2003 in a Heritage Auctions sale where the all sold except the 25 cents dot coin. The other 5 coins sold for a combined total of around $450,000 CAD.

According to research by Heritage Auctions in preparation for the Belzberg sale...

Pittman is said to have offered Roberts's widow the paltry sum of $250 for the six-coin set; the two apparently agreed to a price of a little more than double that amount. Pittman bought a second complete set from another RCM employee, Maurice La Fortune, for $400. This set was stolen from Pittman's house in 1964, but the Dot cent and dime were returned to him in an unmarked envelope.

Early in 1936 Edward became king, succeeding his late father, George V. As was the usual practice, the coinage for the remainder of the year continued to bear the effigy of the deceased monarch, but by early December plans for the new Canadian coinage for Edward VIII were at an advanced stage. The model for the obverse had been completed and production of the steel master tools for some denominations had begun.

Edward's abdication and the constitutional crisis that resulted from his determination to marry Mrs. Simpson negated all the work done on the obverses. As a result, shortages of 1, 10 and 25 cents coins arose early in 1937 before the coins for the new king, George VI, were ready, forcing Canadian authorities to continue producing coins dated 1936 and bearing the portrait of George V. In order to make these coins distinguishable from those actually produced in 1936, a tiny dot was placed on each of the reverse dies; on the 1 cent piece the dot appeared under the date, while on the 10 and 25 cents pieces it was placed under the bow on the wreath. Despite the critical shortages that had led to the emergency production of the dot coins, it appears that only 25 cents pieces were put into circulation. Consequently, the 1 and 10 cents are rarer.

Estimated mintage of 5 specimen, 2 owned by Bank of Canada.