Top 10 most valuable Canadian coins sold at auction in 2022

Here's the Top 10 most valuable Canadian coins sold at auction in 2022 so far. Prices are in Canadian currency. 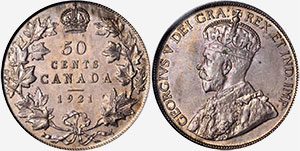 Canada's 1921 fifty-cent piece is a very rare coin; fewer than 200 are believed to exist. This is a direct result of the great variation in demand for fifty-cent pieces since their introduction in Canada in 1870. This SP-62 example was previously described by Stack's Bowers:

The 1912 Canadian Specimens are comparably more obtainable than most other years; yet, when encountered in this elite preservation, their rarity increases tenfold as does their appeal to grade-conscious collectors.

This half dollar sold at the same auction as the 1932 example on this list. Only 40,000 examples of this coin were produced. This particular coin is listed as MS-62 on PCGS website, but marked as MS-63 at the The Canadian Numismatic Company auction. 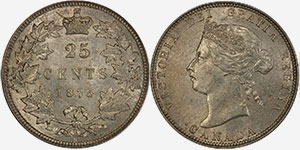 One of only 5 Mint State examples known to exist, this coin sold in January 2022.

In 1921, a legislation was passed to remove silver 5-cent coins and replace them with 21mm (instead 15.5mm) 100% nickel ones. At that time, the Mint melted more than 3 million of silver five cents coins which most of them were from 1921. Only 400 silver 5-cents coins are believed to have survived. Considered The Prince of Canadian Coinage.

Like all other British North American colonies, Newfoundland adopted, in the mid-19th century, a decimal currency. However, in introducing the new currency in 1865, Newfoundland, unlike other colonies, chose to include a gold coin among the denominations it was issuing.

Some 1,000 Spanish Milled Dollars were officially pierced and countermarked; the pierced coins were over-valued as 5 Shillings, while the cut-out centers were under-valued as Shillings. Since the actual silver value of the latter was greater than its new denomination, most of them vanished from circulation. A thousand pierced pieces were insufficient to relieve the prevailing shortage and prominent area merchants privately added to the supply, agreeing to receive their version of the Holey Dollar at par with the government issue. Official circulation ceased in September 1814, though local merchants continued to accept the pieces for a few more years. 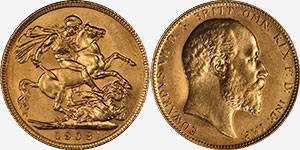 Only 636 examples were struck in 1908, all of which are Specimen strikings. Because the Ottawa Mint was a branch of the Royal Mint in 1908, it was part of the duty to produce Gold Sovereign for London. The mintmark C above the date stands for Canada. 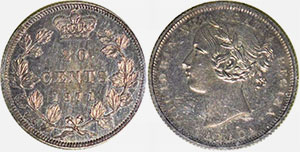 Most patterns, essays and trials were not approved for release, but produced to evaluate a proposed coin design, new or revised coinage, to test the metal composition, dies, structure of the coin, etc.

Pictures by Heritage Auctions, PCGS and The Canadian Numismatic Company.