What is money? - Articles on canadian coins - Coins and Canada

You are: Home » Canadian coins » Articles » What is money?

When we think of money, we typically think of bank notes and coins. But today, the bulk of money consists of deposits in financial institutions, which exist merely as signals in computer memories. As civilizations evolve, they search for more efficient means of exchange. Consequently, money has changed from objects with considerable intrinsic value to the purely symbolic, its value hinging solely on the reputation of the issuer. Virtually anything can be used as money, as long as it is relatively rare and widely accepted. It must also hold its value and be easily divisible, durable, easy to transport, and difficult to counterfeit.

Money plays three major roles in society. First, it acts as a medium of exchange for the purchase of goods and services. Second, money provides a store of value so that it can be saved and used in transactions at a later date. Third, it acts as a unit of account, providing a standard measure against which the value of transactions and financial accounts can be recorded. 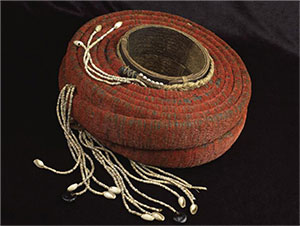 As late as the 1960s, red feather money was used in the Santa Cruz Islands as a bride price, to purchase items such as canoes, and to pay fines. Made from the feathers of about 300 birds, the coils took between 500 and 600 hours to produce.

Money emerged in response to religious, sociological, and economic factors. 1 Highly prized objects were used as payment for brides, as blood-money, or as tribute. They were also used in ceremonies and as ornaments. Shells and beads were particularly desirable in this regard. As societies became more complex, such objects were used to facilitate trade, replacing barter, which required a match between the needs of the buyer and seller. Precious metals were particularly well suited to this role. Gold, silver, and copper could be easily stored and thus gained wide acceptance, especially when governments began to produce coins of standard weight and quality. 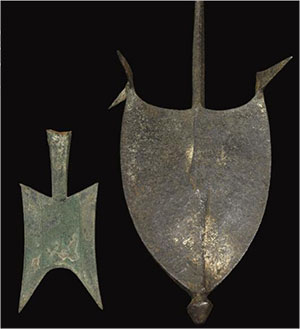 Before the advent of round coins in China, about 200 BC, money took the form of miniature tools such as knives and hoes.

This hoe-shaped iron blade was used as bride price or dowry in west central Africa as recently as the early 20th century.

Notes issued by banks and governments began to circulate widely during the 17th century. Such bank notes, denominated in standard amounts, were typically backed, at least partly, by reserves of gold and silver. Government-issued bonds were sometimes used as currency and continue to be a store of value. Scrip issued by merchants, along with other forms of private money, including personal cheques, has also periodically found broad acceptance as a currency substitute.

With the collapse of the Bretton Woods system of fixed exchange rates during the early 1970s, the last formal link between money and gold was broken. Since then, all major currencies, including the Canadian dollar, have been pure fiat money, their values fluctuating against each other in currency markets. The way we make payments continues to evolve with the wide use of credit and debit cards, the development of digital cash in the form of stored-value cards, and new electronic payments networks.