You are: Home » Canadian coins » Foreign countries » Cuba has long history of commemoratives

Cuba has long history of commemoratives

Christopher Columbus and his fellow sailors first caught a glimpse of Cuba in October 1492. Searching for the Orient in pursuit of spices and gold, Columbus instead found a large island that historians believe was inhabited by approximately 100,000 aboriginal people. Less than 20 years later, when Spain decided to conquer the inhabitants, Diego Velazquez de Cullar, a Spanish army veteran, took the task to heart. A Spanish friar named Bartolom, de las Casa called Velazquez:

Richer than anyone, with much experience in shedding or helping to shed the blood of these unfortunate folk. 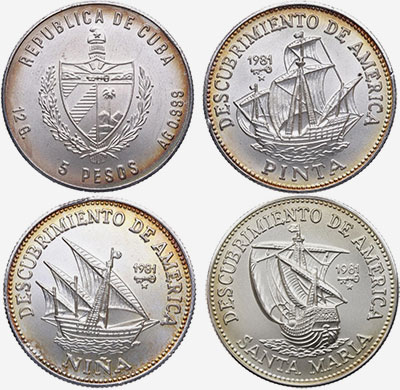 Cuba often celebrates Christopher Columbus and his ships on its coinage.
These 1981 commemoratives picture the Nina, Pinta and Santa Maria.

The aboriginal people of Cuba were not only forced to give up whatever gold they had, they were also pressed into mining and panning for the golden metal. By 1530, decimated by war, overwork and European diseases, fewer than 5,000 aboriginal people remained alive. Cuba has produced quite a number of coins taht commemorate Columbus, his ships and the aboriginal people he encountered. Among them, is a set of three different coins commemoratinf Columbus' three famous caravels, called Nina, Pinta and Santa Maria. These are copper-nickel one-peso coins, dated 1981. The Cuban Mint also made five peso silver coins and 100 peso gold coins in this series.

The Cuban Mint has produced many other coins commemorating the first encounters between Europeans and aboriginals in Cuba in 1492. They include a 1990 coin with a ship superimposed on a map of the island, as well as one produced in 1989 showing the three ships with the words Tierre! Tierra! which means Land! Land! in English. Another coin shows the likeness of Hatuey, the famous aboriginal leader.

By the mid-1500s, Cuba became a staging point for trade and commerce between Spain, the Caribbean, Central America and South America. This occured for several reasons:

Much of the gold and silver plundered from other parts of the Americas first went to Havana for transport to Spain aboard convoys of ships so the cargo would be safe from pirates and the fleets of other European countries, which were often at war with Spain. Cuba has struck coins on many themes, but one of the monst interesting themes is the Pirates of the Caribbean series. While the coins come in proof gold and proof silver versions, more affordable one peso coins were also produced in copper-nickel. All six coins in the full-color set have a polychrome illustration printed on paper and then stuck onto the obverse. The pirates in this series include Captain Kidd, Captain Morgan, Piet Heya and Blackbeard, as well as two famous female pirates: Anne Bonny and Mary Read.

I'm going to skip a few centuries ahead to when Jose Marti's Partido Revolucionario Cubano (Cuban Revolutionary Party) declared its anticolonial war in 1895. While the war lasted only three years, the book Cuba: A Country and its Currency claims it was...

...the bloodiest and fiercest ever fought in the Americas.

Consider this: Spain mobilized over 400,000 soldiers in an attempt to keep the revolutionary Cuban genir inside the Spanish colonial battle. Hundreds of thousands of Cubans lost their lives during this was, both in battle and as a result of forced-relocation of the entire rural population into the cities and towns where many died from starvation. Because the Cuban revolutionaries controlled most of the countryside while the Spanish troops only controlled the cities, Spain decided to cut its losses and granted limited autonomy to the Cuban olygarchy. But the Cuban revolutionaries refused to put down their weapons.

That's when the Spanish-American War started after the U.S. cruiser, Maine, exploded in Havana harbor and the U.S. government declared war on Spain. The Spanish colonial army, which had been defeated by Cuban revolutionaries, quickly surrendered to the Americans. But the Treaty of Paris did not give Cuba its independence. Cuban revolutionary Jose Marti was killed in action in 1895. Marti is still as revered by the Cuban people today as he was more than 100 years ago. Cuba has produced a great deal of coins and paper money with his likeness on it. Some were produced in 1950s before the present revolutionary government took power in1959, but most have been produced since then. An attractive brass one peso, dated 1988, is one of many with Marti's likeness.

But the two most beautiful coins Cuba has ever produced were not authorized by the colonial government. In 1897 and 1898, Cuban revolutionaries in exile authorized the minting of two silver coins to help raise fonds for Cuban independence. From 1892-1898, exiled members of the Cuban Revolutionary Party in the United States collected more than U.S. $1.5 million – a huge amount of money in those days. The first coin, dated 1897, has the word Souvenir below the profiled face of Leonor Molina Adan. Persecuted, jailed and exiled, Adan became a symbol of the Cuban women who took part in the struggle for independence. During the summer of 1897, a total of 10,000 Souvenir pesos were minted in the shops of the Dunn Air-Brake Company of Philadelphia..hth

There is much speculation that the reason the word Souvenir was used on this coin was to avoid legal conflicts with the U.S. government, since the coin was minted in the United States. The other coin, prdocued in 1898 is similar, but lacks the word Souvenir. Only 1,000 1898 pesos were minted by the Gorham Manufacturing Company.

One of the most beautiful coins in Cuban history is the silver Souvenir coin of 1897, picturing Leonor Molina Adan, who became a symbol of the Cuban women in the struggle for independence. This coin, produced in 1987, celebrates the 100th anniversasry of that coin.

These two coins are quite rare, and therefore, expensive. But the Cuban Mint has produced some relatively inexpensive re-strikes in one peso and five pesos denominations to celebrate the 90th anniversary of the original Souvenirs produced in Philadelphia. The U.S. military occupation of Cuba lasted until 1902, when Cuba officially gained its independence and became a republic. But the official currency from 1898-1914 was the U.S. dollar.

The first Cuban coins were produced in 1915 in copper-nickel in denominations of one, twot and five centavos, and in 90 percent silver in denominations of 10, 20 and 40 centavos. There were also one peso silver coins and a small one peso and a much larger 20 pesos gold coin, both of which depict Jose Marti. Many other coins were produced from the 1920s-1950s. Because Jose Marti was born in 1853, the government of uba decided to mark the centennial of his birth with the issue of a series of coins with Marti's effigy. It issued a brass centavo as well as three silver coins in denominations of 25 centavos, 50 centavos and one peso, all of which were struck at the Philadelphia Mint.

Former general Fulgencio Batista had been military dictator of Cuba from 1934-1940. In 1952, eight days before the next presidential election, Batista ordered a coup d'état to prevent the election of a party he did not support. The coup became a rallying cry for large numbers of Cuban revolutionaries. One of them was a young lawyer named Fidel Castro. On July 26, 1953, Castro and fewer than 100 others attacked the Moncada army barracks in Santiago de Cuba, the country's second-largest city. While few of the revolutionaries died in the immediate battle that day, Batista embarrassed that a few civilians had almost taken over one of his most important garrisons, ordered the murder of all the prisoners and the pursuit of all those who escaped. Most of thos who escaped were captured and later sentenced to prison.

Castro was one of those. in his own defense, Castro gave what is now called his History will absolve me speech, which touched many Cubans. There was so much support for the July 26 movement (named for the day of the attack on the Moncada barracks) that the Batista government had to grant amnesty to all remaining prisoners in 1955. But several revolutionaries were soon arrested, while others were murdered. So Castro and many other Cubans left the country for Mexico, where they plotted to overthrow the dictatorship.

In 1956, Castro and fewer than 90 other armed revolutionaries sailed from Mexico on an American yacht called the Granma. Cuba has produced several coins with the image of the Granma on the obverse. One produced in 1986 commemorates the 30th anniversary of the landing of the revolutionaries aboard the famous yacht. The independence movement that had seized the imagination of generations of Cubans, from Marti to Castro, finally succeeded on Jan. 1, 1959, when the Cuban revolutionary movement took over the country after Batista and some of his supporters fled the country.

To commemorate the victory over Batista, Cuba has produced quite a few coins commemorating the fallen heroes of their many revolutions: from 19th century heroes such as Marti, Cespedes, G∅mez and Maceo, to more modern revolutionaries such as Che Guevara, Camilo Cienfuegos and Castro. Cuba is a poor Third World country, but its history his rich and vibrant. The history of this nation is splendidly displayed on many of its coins.