The louis d'or illustrated was issued in France under the authority of John Law, a Scottish banker, who was the chief financial adviser to Louis XV. First issued in 1720, it appeared at a time when France was nearly bankrupt, having engaged in costly and unsuccessful wars in the first quarter of the 18th century.

The value of the paper and metallic currencies of the time reflected the state of the economy. The louis d'or of this type bore no denomination because the government could vary the rate of exchange. At first, the rate of the gold coin was vastly inflated in an attempt to gain revenue for the state. However, as public resistance to the inflated ratings grew, the government periodically lowered the rate. In 1720, the official rating was 54 livres; by 1723, when coins of this design were recalled and replaced by a new design, the rating had dropped to 39 livres, 12 sols. In New France, the "John Law" gold coins saw only limited circulation.

Slightly larger than a Canadian 25-cent piece, the louis d'or features a crown over two Ls, which are back to back. Three fleurs-de-lys adorn the field. The number "9" at the bottom of the piece represents the mint at Rennes and the Latin legend "CHRISTUS REGNAT VINCIT IMPERAT" translates to "Christ reigns, conquers and commands." 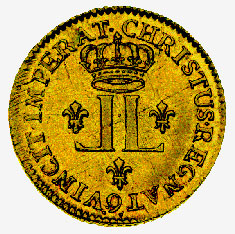