When the Spaniards came to the New World they found much that aroused their cupidity, particularly the rich gold and silver mines of Mexico and South America. Soon great treasury fleets began sailing regularly from the New to the Old World, and for the first time in its history Europe had an abundant supply of both metals.

The first mint in America was established by the Spaniards at Mexico City in 1536, and other mints were set up shortly thereafter in other parts of Mexico and in South America. The coin that was minted in the greatest quantity was a large silver piece with the value of 8 reales. This coin soon became the most acceptable trade coin throughout the world. During its history it was given several names: piece of eight, Spanish dollar and pillar dollar (from the pillars of Hercules which appear on the reverse side). It is the coin most frequently mentioned in pirate stories and tales of buried treasures. The last Spanish dollars were struck in 1825 but they continued to be legal tender in the United States until 1857 and in Canada until 1860. They still circulated freely in the coastal cities of China until the 1930s. The piece of eight illustrated is in the Bank of Canada's National Currency Collection. 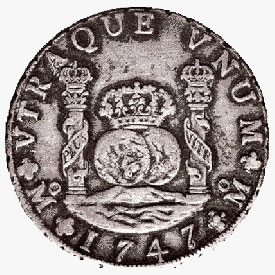