The pistareen, a silver coin struck in Spain between 1707 and 1771, was first issued by the rival claimants to the throne during the Spanish Wars of Succession (1701-1713). This coin provided much of the small change in the British Colonies of the West Indies until 1825 and was also used extensively in Canada and the United States until the early part of the 19th century. Initially the pistareen was valued at 2 reales or 1/4 part of an 8-reale piece (Spanish dollar), but because it had a reduced silver content it was accepted only as one-fifth of the 8-reale piece. Unpopular in Spain, the pistareen rapidly found its way to the New World where coins were in short supply and there was always a great need for small change.

In the West Indies, the Spanish dollar was often valued at 5 shillings, and so the pistareen served as a shilling or was cut into fragments for fractional denominations. Occasionally it was passed to the unsuspecting as a quarter dollar. After the introduction of British silver coin to the West Indian colonies in 1825, the pistareen was driven out of circulation. In the United States the pistareen circulated at a value of 20 cents until 1827 when it fell to 17 cents; shortly thereafter it was demonitized - first in the United States and then in Canada. Thus, after a century of use, the pistareen had lost its importance in the New World. The illustration shows the reverse of a pistareen dated 1723 struck in the reign of Philip V of Spain and bearing the arms of Castile and Leon (castles and lions). The coin is slightly larger than a Canadian 25-cent piece and is part of the National Currency Collection, Bank of Canada 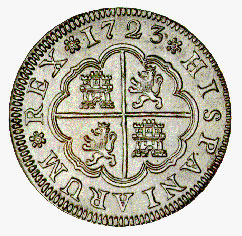