Compared to the bitter blizzards, ice storms and snow storms that were causing havoc over much of the United States and Canada, it was a warm December morning in Havana, Cuba. But the reception I got at Casa de la Moneda de Cuba, the Cuban Mint, was event warmer. The Commercial Office of the Cuban Mint is located on the second floor of the Sierra Maestra Building in Miramar, one of the prettier sections of Havana. The office is just across the street from the shores of the turquoise-blue Caribbean Sea.

Soon after I checked in with the receptionist in the lobby, I was greeeted by Deborah Lorenzo Silva, a sales executive with the Cuban Mint. We went upstairs by elevator, then entered an office with a tastefully decorated reception area. Inside the reception area, I was ushered into a modern office. There I met Marcos Campnioni Tamayo, the manager of the Commercial Office. Marcos and Deborah offered me coffee, juice and water, and then we began to talk business. They gave me their latest copy of La Moneda de Cuba, a bilingual (Spanish and English) catalog of coins for sale by the Cuban Mint. The catalog was beautiful - nicely designed with color photographs of a large selection of Cuban commemorative coins since 1977, when the Mint struck its first coins.

They also gave me gifts, including several Che Guevara pins and a new cased Guevara medal. The obverse of the 45 mm medal shows Guevara as a guerrilla in high relief, with his signature to the right. The reverse of this antiqued-finish medal shows Guevara atop the memorial where his remains are buried. The words MEMORIAL AL CHE mean memorial to Che. Underneath the memorial are the words COMPLEJO MONUMENARIO SANTA CLARA, the date - 2000, and a key, representing the Mint in Havana. The monument to Guevara is in Santa Clara, Cuba, the site of one of the most important battles in the overthrow of General Batista.

I told Marcos and Deborah I had been collection coins for about 40 years and have quite a few newer Cuban coins, and want to buy more so I can sell them at coin shows and over the Internet. They asked me where I had gotten my Cuban coins. I told them I bought most of them from two major coin dealers - one in Canada, the other in Great Britain. Since both dealers were already Cuban Mint distributors, the officials knew both dealers quite well and were pleased that I wanted to purchase Cuban coins directly from the Cuban Mint.

Marcos excused himself from the meeting, saying he had another meeting to go to. That's when Enrique Martinez, another sales executive, joined the meeting. We got down to business. Since both Enrique and Deborah speak English well, they began by showing some of the coins the Cuban Mint has for sale. First was a cased set of three one-ounce .999 silver 10 peses commemorating Che Guevara. The coins have a diameter of 38 mm and come in proof. 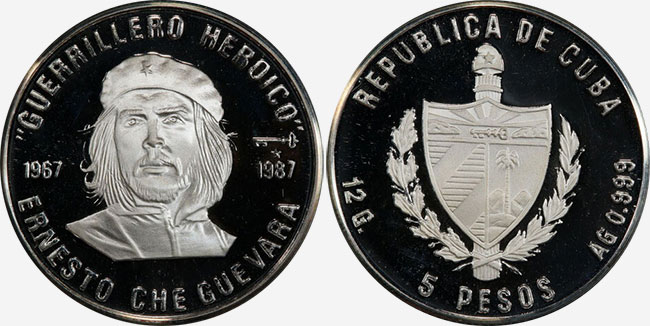 The common obverse shows the Cuban coat of arms, as well as 30 Aniverario de la caida en combate de Ernesto Guevara de la Serna y sus Companeros (30th anniversary of the death in combat of Ernesto Guevara de la Serna and his compatriots). The first coin in the set is dated 1997, commemorating the death of Guevara in Bolivia 30 years earlier. The reverse shows Guevara walking with a rifle over his shoulder, with his signature below and to the right, and the dates 1967 and 1997 struck in relief on four mountains. The coin has the words GUERRILLERO HEROICO - heroic guerrilla, on either side of the design.

The second coin in the set dates from 1992, commemorating the 25th anniversary of Guevara's death. It depicts Guevara in classic pose with the words Guerrillero Heroico Ernesto Che Guevara, and the dates 1967-1992. The third coin depicts Guevara as a minister of the Cuban government, facing left. It is dated 1967-1997. Although I think all three coins are exceptionally attractive, I find the pose of Guevara as government minister to be the most detailed and most artistic coin in the series. All three coins are low-mintage, with only 10,000 coins struck in silver.

They also showed me three different sets of hand-painted 32.5 mm one-peso coins. The first series of six BU coins depicts a brown spotted eagle ray, dolphins, flamingos, a pelican and two more fish. All are dated 1994. The mintage is 10,000 pieces for each, except the lovely flamingo coin, which has a mintage of 12,000. The second series consists of three birds, two fish and one butterfly. My favorites are a colorful wood duck, a ruby-throated hummingbird and a papilio butterfly. All are dated 1996, with a mintage of 10,000 each.

The last series of hand-painted coins was produced in 1997. The coins depict the plants and flowers of the Caribbean. My favorite is a lovely red and orange hibiscus with a yellow and red pistil. The mintage of these coins is only 5,000 pieces. After seeing these coins I immediately ordered sets of each. Then I went through the catalog and ordered other coins and medals. When I asked how I should pay for the coins and medals, they said they would gladly accept payment in Canadian dollars, but that it would take some time to figure out the invoice and get all the coins together.

They asked what hotel I was staying at, and said they would deliver the coins and the invoice to my hotel the next morning, and I could pay the next day. Before I left, I told them that when I returned to Canada, I would place another, much larger order. I left the office and got into a taxi that contained my wife, Denis, as well as our good friends Kerry MacDonald and Margaret Hnidy. The taxi drove off and we continued on with our vacation.

Another taxi dropped us off at La Plaza de Armas, where we walked around a square, browsing through a huge outdoor used-book flea market. I picked up several books on Cuban coins, including a brand new hardcover copy of Cuba: A Country and its Currency, by the National Bank of Cuba. When the booksellers found out I was looking for Cuban coin books, they quickly pulled out a few Cuban coins and a lot of Cuban paper money, some of which was from the 19th century. But most of it was recent, from 1949, 1958 and 1960, and some of the later examples had Guevara's signature. Kerry, my coin-collecting friend and I both purchased some from these three series.

Kerry found three older bills to his liking and purchased them all: a small 20-centavos note, dated 1897, a one-peso note and a five-peso note. The later two notes were printed in 1896. Meanwhile, I bought five bonds that helped finance the Cuban revolution, ,as well as four uncirculated specimen notes from the 1970s and 1980s. The next morning, I met Deborah and Enrique in the lobby of my hotel. The invoice had been calculated in U.S. dollars, so Deborah made a quick call to a Cuban bank to find out the exchange rate. I paid them, they gave me all the coins and medals and we said good-bye.

The next day, the newest authorized distributor of Cuban coins left the swaying Cuban palm trees and the warm glow of the sun for the below-zero Canadian winter.