As it continues to advance the art and science of coin manufacturing, the Royal Canadian Mint is proud to introduce a striking variety of new collector coins which celebrate Canada through nature, art and history. This newest collection includes: the Mint's first glow-in-the-dark coin in a new 25-cent dinosaur series; new Maple Leaf Forever coins in gold, silver and platinum; the first in a series of fine silver coins honouring Canada's famed Group of Seven; a fine silver coin celebrating the 25th anniversary of Rick Hansen's Man in Motion world tour; a ¼ fine gold coin dedicated to the 200th anniversary of the War of 1812; a new fine silver and venetian glass coin featuring a mauve Aster and bumblebee; a new Maple Leaf and crystal raindrop silver coin; and a new issue from the immensely popular 25-cent Birds of Canada coloured coin series featuring the Rose-breasted Grosbeak.

The amazing diversity of symbols and stories that reflect the Canadian experience offer the Royal Canadian Mint an endless choice of compelling designs and images to display on its world-class collector coins.

The Mint is proud to combine the artistic and technological talents of its people to create coins which tell the myriad parts of the story of Canada in unforgettable ways.

Prehistory meets high technology as the Mint uses its first-ever glow-in-the-dark collector coin to shed a new light on the lost world of prehistoric animals. Proud of its reputation as a global leader in coin manufacturing and always keen to innovate, the Mint has worked with a technology partner to develop a sophisticated new photo-luminescent coin. 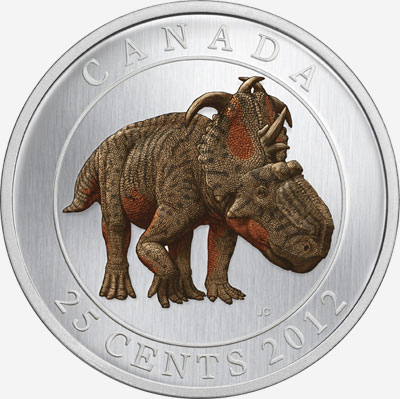 The subject of this groundbreaking coin is the famed fossil of Pachyrhinosaurus Lakustai, first discovered by science teacher Al Lakusta at Pipestone Creek, Alberta. In addition to discovering a new dinosaur species, Lakusta located a fabulous deposit of prehistoric bones which Alberta's famed Royal Tyrrell Museum of Paleontology has been excavating and preserving since 1986.

In the spirit of celebrating Canadian advances in understanding the prehistoric era, the Mint produced a painted image of a living Pachyrhinosaurus Lakustai on a 35 mm cupronickel coin over which its proprietary photo-luminescent feature cleverly reveals the skeleton of this Late Cretaceous creature when the coin is placed in darkness. Both the living and skeletal views of this dinosaur are the work of paleoartist Julius T. Csotonyi.

This theme of obvious appeal to youth and children is brought to life for the enjoyment and education of Canadians of all ages by telling an important story of Canada's global leadership in the discovery study of prehistoric fossils. Limited to a world-wide mintage of only 25,000 coins, this exciting new collectible will be joined by three other issues in a four-coin series. It retails for $29.95 CAD.

Since the birth of Canada nearly 145 years ago, the maple leaf has been our calling card to the rest of the world. Its image has been celebrated in art, literature and even song, when Alexander Muir's "The Maple Leaf Forever" was published in 1867; the year of Confederation.

One year after releasing gold and silver kilo coins celebrating our enduring maple leaf, the Mint has found even more ways to celebrate a symbol of our nation which represents Canadians' stalwart spirit and strong connection to their natural landscape. A twig of three Sugar Maple leaves, a prominent feature of the first provincial flags of Ontario and Quebec, were designed by artist Luc Grondin for the reverse of five new Maple Leaf Forever coins.

Given recent high demand for half-ounce, 99.99% pure silver coins, the Mint has introduced a $10 fine silver version of the Maple Leaf Forever. With a mintage of 100,000 coins, this popular type of coin is available at $34.95 CAD.

Popular with collectors looking for finely crafted pure gold coins at an affordable price, the Mint's 1/10 ounce, 99.99% Fine Gold coin has found a powerful new theme with the Maple Leaf Forever. Limited to a world-wide mintage of 25,000, this classic pure gold coin is available for $229.95 CAD. As pure precious metal coins, all of the 2012 Maple Leaf Forever collector products are GST-exempt.

Motivated by a desire to escape the artistic conventions of their time and explore the bold authenticity of impressionism in painting Canada's landscape, a visionary group of commercial artists banded in 1920 to form Canada's famous Group of Seven. The artistic movement they created has since grown into a pillar of Canadian identity. Still inspiring us today, the artistic legacy of the Group of Seven is an ideal subject for a new series of silver coins engraved with the same fervour as the artists who painted their celebrated masterpieces. 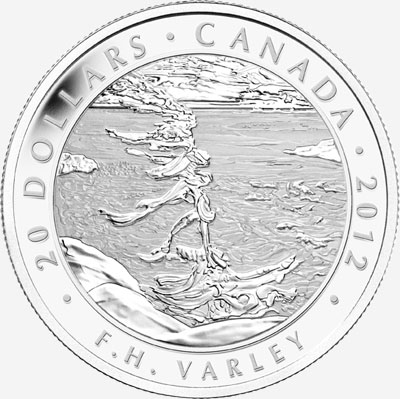 The first of seven new fine silver coins celebrates Frederick H. Varley's Stormy Weather, Georgian Bay (1921). Painstakingly engraved to capture the texture of every brush stroke, this silver masterpiece is crafted of 99.99% pure silver and is limited to only 7,000 coins world-wide. A total of three coins will be released in 2012 and the remaining four will be launched in 2013. Each coin retails for $89.95 CAD and can also be purchased as part of a seven-coin subscription which includes a free black-lacquered maple wood collector case.

Twenty-five years ago, the belief that anything is possible drove Rick Hansen to complete a historic solo journey around the globe to raise awareness and funds for spinal cord injury research. In celebration of this heroic achievement, the Mint has issued a new fine silver coin featuring an ingenious design by artists Chris Reid and Rosina Li, of a bird's eye view of Rick Hansen wheeling in pursuit of his dream, leaving in his wake evocative words such as "inspire", "journey" and "anything is possible". 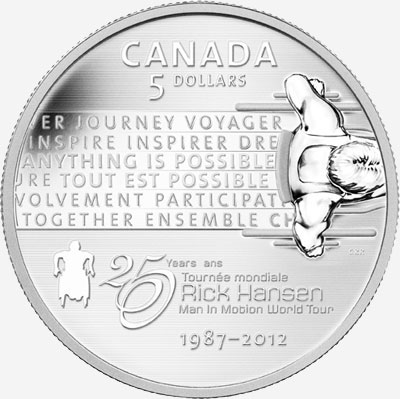 On its 25th anniversary, the spirit of the Man in Motion Tour has not lost momentum as the Rick Hansen Foundation continues to research a cure for spinal cord injury and make a difference in the lives of people everywhere. The Mint is proud to celebrate the legacy of a true Canadian hero with the finely crafted 2012 $5 Fine Silver Coin  25th Anniversary of the Rick Hansen Man-In-Motion Tour. With a mintage of only 7,500 and retailing for $69.95 CAD, this proof silver coin makes an excellent addition to one's collection; a gift to a loved one; or a special thank you to a difference maker in one's life.

The bicentennial of the War of 1812 reminds Canadians of a critical step in our country's long march towards nationhood. It is also the historical turning point from which almost two centuries of peace have reigned over Canadian territory and the United States of America. The Mint is proud to have dedicated its 2012 Silver Dollar in commemoration of the brave defense of the lands which would become Canada and it is pleased to add a new perspective on remembering the War of 1812 by honouring both sides of this historic conflict with a ¼ oz., 99.99% pure gold coin with a $10 face value. 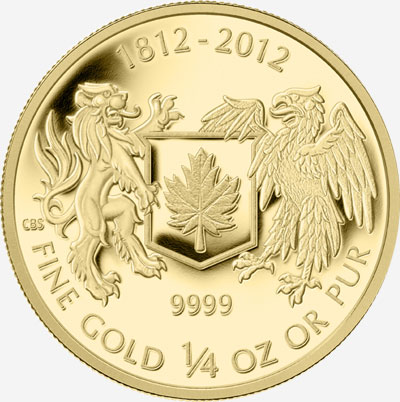 Designed by Fraser Herald of the Canadian Heraldic Authority Cathy Bursey-Sabourin, this coin features a powerful symbolic representation of the War in a heraldic style that eloquently expresses the allegorical relationships between the people and events of the War of 1812. The eagle, representing American forces, stands powerfully opposed to the lion, who symbolizes the British forces. Between them stretches the shield of military conflict, upon which is emblazoned the maple leaf, signifying the shared resolve of the English- and French-speaking Canadian volunteers and First Nations warriors who worked together to bravely defend their land and ways of life. The coin is embossed with the commemorative dates "18122012".

Following the resounding success of a fine silver tulip coin with a glass ladybug, the Mint is pleased to celebrate spring with a new fine silver and Venetian glass creation with the Aster and glass bumblebee. This colourful perennial herb, which bears striking blue, mauve, pink or white flowers, is a favourite food source for the bumblebee on which it counts as a key pollinator. This symbiotic relationship is captured with a dazzling painted mauve Aster designed by artist Maurice Gervais, on a 99.999% pure silver coin on which a vibrant yellow and black bumblebee, finely crafted in Venetian glass, has delicately landed. 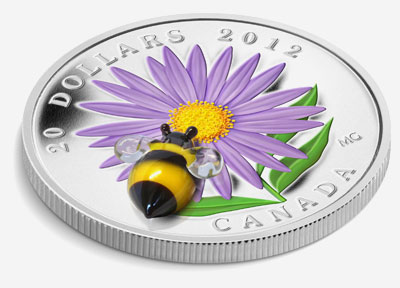 Handmade by master craftsman Giuliano Donaggio, the bumblebees found on only 10,000 of these new coins are miniature masterpieces of Venetian glass work which make each of these precious silver coins unique and highly desirable. The Mint's $20 Fine silver Coin  Aster with Glass Bumblebee is available for $139.95 CAD.

The Aster and bumblebee are also captured in bold colour by designer Maurice Gervais on a 25-cent cupronickel collector coin. This 35 mm-wide coin has an elegant specimen finish and is limited to a mintage of only 20,000 coins. It is available for $29.95 CAD.

A "Sugar Maple" crystal raindrop coin returns in 2012 as demand for this coveted series of technologically-enhanced coins stretches to a fifth consecutive year. Made of 99.99% pure silver and designed by renowned botanical artist Celia Godkin, this coin features the iconic painting of a Sugar Maple leaf in blazing fall colours with a solitary raindrop, symbolized by a brilliant Swarovski Element crystal, delicately running from its tip. 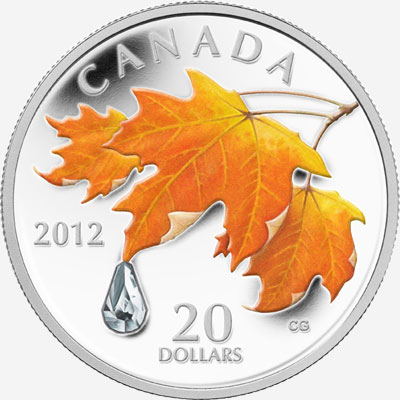 The Mint is offering only 10,000 of these coins at the retail price of $119.95 which, like all previous coins in this series, are expected to sell briskly.

A perennial high flyer in terms of collector appeal, the Mint's wildly popular Birds of Canada series is back with a new coloured 25-cent coin celebrating the Rose-Breasted Grosbeak. Illustrated by Ontario wildlife artist Arnold Nogy and reproduced in a vibrant paint application over cupro-nickel, this coin features a bright-chested male Grosbeak delicately perched on the stem of a maple tree. Limited to a mintage of 14,000 coins worldwide and retailing for $29.95 CAD, the Mint's ninth Birds of Canada coin is sure to be another hit with coin collectors and birders alike. 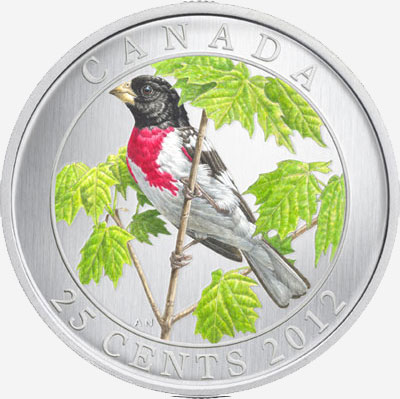