The story of Canada is a great source of inspiration which offers Canadians and collectors all over the world an endless variety of Royal Canadian Mint coins renowned for their beauty, innovation and craftsmanship.

The Mint is always excited to find new ways to celebrate the greatness of Canada on its coins and to create memorable keepsakes which excel in their visual and emotional appeal.

To complement the series of 2011 commemorative circulation coins celebrating our legendary nature, the Mint has commissioned designs which offer new perspectives on the Canadian Boreal Forest; the Wood Bison; the Orca; and the Peregrine Falcon in the memorable style of British Columbia Artist Corinne Hunt, recently celebrated for her innovative design of the Vancouver 2010 Winter Games athlete medals. Crafted from 1/25 ounce of 99.99% pure gold and struck in a proof finish, these coins capture the beauty of Canada's boreal forest; one of the world's largest ecosystems, as well as the majesty of three Canadian animal species that are conservation success stories in Canada. 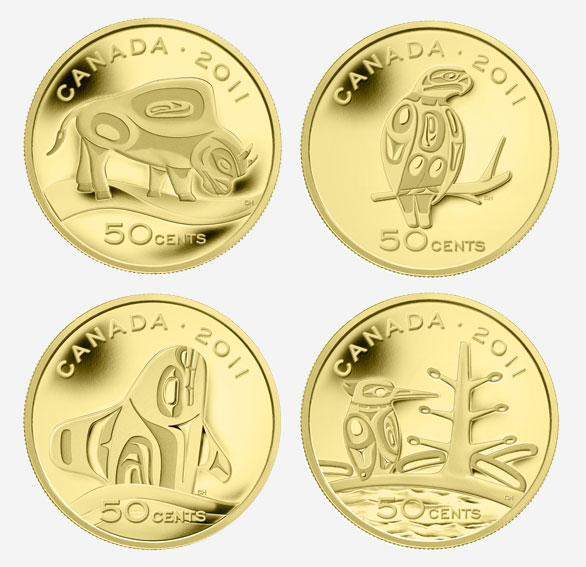 Executed in Corinne Hunt's unique interpretation of traditional Kwakwaka'wakw and Tlingit forms, these miniature works of art are limited to a mintage of 2,500 coins each and retail for $139.95 CAD.

Corinne Hunt's evocative designs are captured once again on half-ounce coins crafted of 99.99% pure silver, enhanced by a proof finish and bearing a $10 face value. The reverse design of the Canadian Boreal Forest coin depicts a stylized kingfisher overlooking a pine tree and four ovoid shapes, symbolizing regeneration, line the ground and the ends of the tree branches, representing the forest's cycles of life, death, and rebirth. A reflection of the forest in the water below completes the circle of life's elements: air, land, and water. 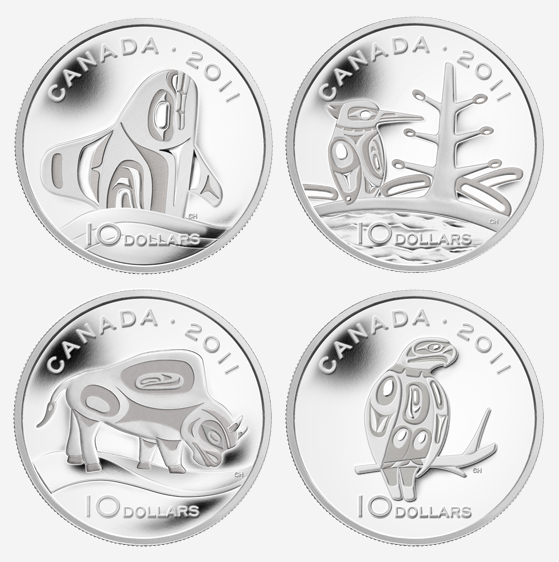 Her depictions of the Wood Bison, Orca and Peregrine Falcon are equally rich in symbolism, with each animals' body incorporating an ovoid representing life and the seed of the future for the Wood Bison; the many generations, past and present, of the community in which the Orca thrives; and the symbol of birth and rebirth on the Peregrine Falcon. Retailing for $69.95 CAD, only 10,000 examples of each coin are available world-wide.

The recently announced series of 25-cent 2011 commemorative circulation coins celebrating Canada's legendary nature can now be collected in precious sterling silver. The coloured versions of all three coins; the Wood Bison, Orca, and Peregrine Falcon have been struck in 92.5% silver and 7.5% copper, enhanced with a pristine proof finish. The colour enhancements, also applied to a percentage of the circulation versions, add a final flourish to this exclusive three-coin collector set. Limited to a mintage of 10,000 sets world-wide, this new collectible retails for $49.95 CAD. 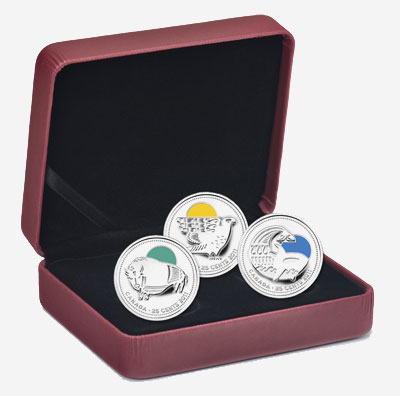 The 25-cent commemorative circulation coins featuring the Wood Bison, Orca, and Peregrine Falcon can also be collected in special-edition uncirculated sets featuring both the coloured and uncoloured versions of these exciting new commemorative circulation coins, as well as the two-dollar Boreal Forest and one-dollar Parks Canada Centennial coins. Each of the 20,000 sets are serialized and retail for $23.95 CAD. 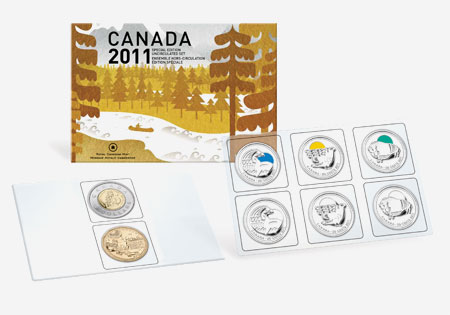 In an exclusive follow-up to the kilo silver coin issued in July 2011 to commemorate the 375th anniversary of the first European observation of Lacrosse by French Jesuit missionary Jean de Brébeuf in 1636, the Mint has crafted an exquisite pure gold tribute to this intriguing piece of Canadian history. The elaborate work of artist Steve Hepburn virtually glows in a one-kilo coin fashioned of 99.99% pure gold. Limited to a world-wide mintage of only 35 coins, this bold piece of numismatic art is available for $69,000.00 CAD. 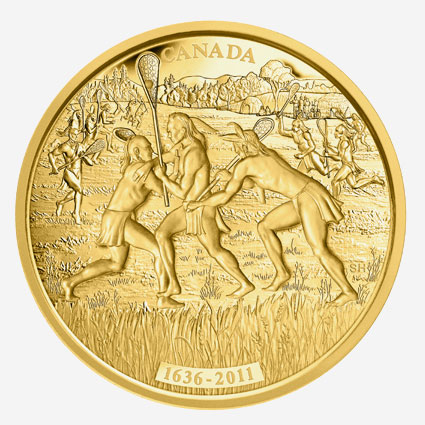 The Mint's annual 14-karat gold Provincial Coat of Arms series continues with Nova Scotia, the oldest of any province or territory, granted in 1625. Nova Scotia, whose name implies a strong connection to Scotland, was the first North American colony to receive its Coat of Arms from the British monarchy. A shield adorned by the cross of St. Andrew, the royal lion at the centre of the shield and a crowned unicorn are three distinct elements transferred from the Royal Arms of Scotland, which pay tribute to one of Canada's most important founding cultures. The Nova Scotia Coat of Arms also honours the First Nations inhabitants of the province with a trident-bearing aboriginal man in full head dress. Limited to a world-wide mintage of 500 coins, this impressive 50 mm gold coin retails for $2,429.95 CAD. 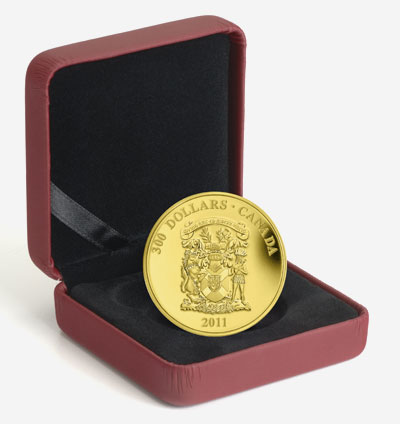 With winter and the holiday shopping season around the corner, the Mint is pleased to introduce two new holiday-themed pure silver coins designed by artist Virginia Boulay. Each crafted of a half-ounce of 99.99% pure silver, the "Wintertown" and "Little Skaters" collector coins evoke idyllic scenes of winter's charm. Their festive quality comes from the addition of painted green holly leaves and red berries near the coin's edge. These fine gift ideas and collectibles are each limited to a mintage of 8,000 coins and retail for $69.95 CAD. 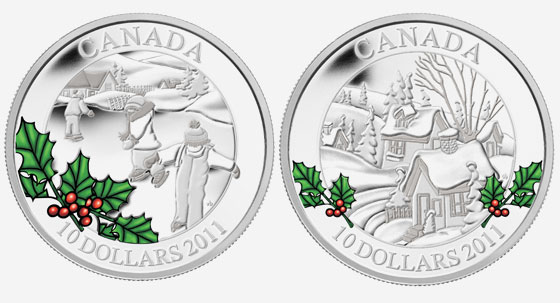 Another fast-approaching date is the 25th anniversary of the introduction of Canada's one-dollar circulation coin. Dubbed the "Loonie" after artist Robert Carmichael's now iconic loon design on the coin's reverse side, this cornerstone of Canadian coinage has been reproduced in silver-plating over bronze-plated steel in celebration of its upcoming silver anniversary. This double-dated collector coin is also packaged in a holder designed especially for the young collector: it includes a kid-friendly "Build your own Loon" paper toy and a full color mini-book with illustrations telling the 25-year story of the Loonie. Available while supplies last, this historic and educational coin retails for $24.95 CAD. 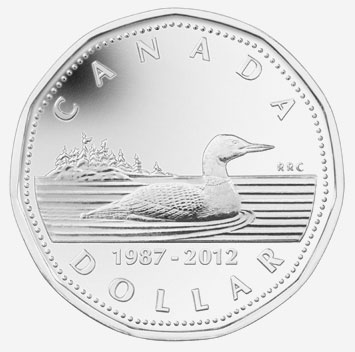