The Royal Canadian Mint and the Gold Standard 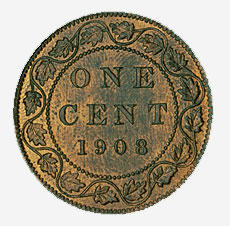 The Bank Act of 1881 restricted the banks to issuing $5 notes and multiples thereof. The government had a free rein as far as coinage was concerned, since the banks did not issue their own coins. In 1908, The Royal Mint in London established a branch in Ottawa. From then on, Canadian coins were produced there, including this 1908 5-cent coin. In 1931 the Canadian branch of The Royal Mint, became The Royal Canadian Mint.

In 1912, the Mint produced its first gold coins. The $5 gold coins did not circulate widely and were used mostly by the banks. They had to back their notes with gold reserves, and found it convenient to keep gold coins in their vaults instead of gold bars. However, the rising price of gold just prior to World War I forced Ottawa to remove from the Bank Act the stipulation that all bank notes had to be backed by gold. From then on, Canada no longer used gold to guarantee its bank notes, except for a brief period from 1926 to 1931. 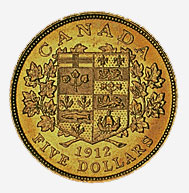 The price of silver also increased substantially during World War I. As a result, in 1919 the Mint was obliged to drop the silver content of silver coins from 92 per cent to 80 per cent. In 1922 the 5-cent coin became a "nickel." The 10-, 25- and 50-cent coins continued to be minted in silver. 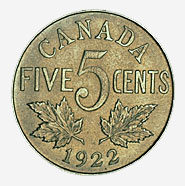