by IvanA
I recently purchased a Token describe as a 1969 Octoberfest Token with a mintage of 200 and made of copper. 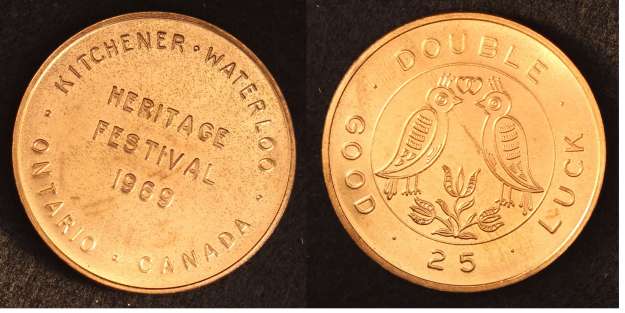 by rich1299
As you suspect this was the forerunner of Oktoberfest though its usually considered the first Oktoberfest in Kitchener-Waterloo. In the last half of the 1800s they held several Saengerfests that were mainly German musical festivals but also included gymnastics/sports apparently. They came to a stop in Canada (though carried on in the USA) around WW1 due to anti-German sentiment. By 1969 with the rise of multiculturalism it was felt safe enough to have a celebration of German culture again, though mainly focused on drinking beer.

This is a very good find, the majority of these are made of aluminum, a small number in silver as well as copper or bronze which you have here but I've never seen one before. I would suspect it would be fairly valuable since its fairly rare, the most common aluminum ones maybe go for $2-$4 or so, later Oktoberfest tokens usually about half that much. I have no idea what its going price would be, probably pretty close to what you paid for it if you got it from someone who knew enough about it to know its mintage. I know of no reference material for Oktoberfest tokens though they might be included in some books on municipal tokens.

Thank You for all this very useful information. I have picked up many of the later Octoberfest tokens for between $ 1 and $ 2 and since this appears to be a key token I think I will become an Octoberfest collertor and try for a complete set..
All times are UTC-05:00
Page 1 of 1
Powered by phpBB® Forum Software © phpBB Limited
https://www.phpbb.com/