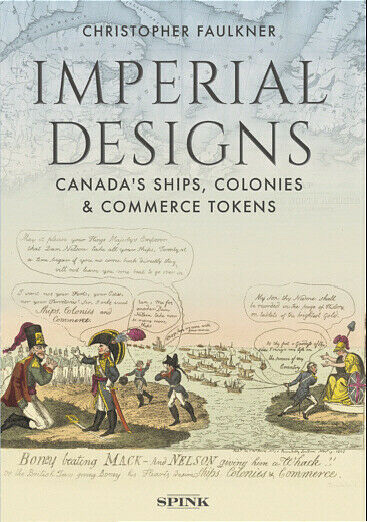 Chapter One explains the historical meaning behind the presence of the ship on the obverse and the familiar legend on the reverse which gives the series its name. The ship symbolized the primary means of transportation which tied the British North American colonies both to one another and to their mother country. Throughout the nineteenth century, the words ships, colonies and commerce had a wide popular appeal and an almost magical authority. As they passed from hand to hand, the tokens not only circulated a store of value (nominally a halfpenny), they also helped to circulate an idea of empire and the primary means by which that idea was secured. The book's first chapter also offers an account of where and by whom the varieties in the series were struck, and when and where the token circulated in the course of its forty-year life. Earlier efforts at cataloguing the series are explained and there is a detailed record of 12 major collections of the past.

Chapter Two is a fully illustrated catalogue of all known varieties and die states of Breton 997, one of the most difficult and challenging series in Canadian numismatics. For ease of identification the series has been broken down into Groups and sub-groups. Within each Group, every variety and die state receives its own catalogue entry. A number of previously unknown varieties are listed. Every entry includes a commentary which explains the characteristics of the variety and its die states. A sales record, where one exists, accompanies each entry.

Chapter Three deals at length with three extremely rare and controversial Ships, Colonies & Commerce tokens, Breton 999, 1000, and 1001. Every known example of each of these tokens is illustrated and pedigreed. Biographies of W.A.D. Lees and L.A. Langstroth, two of the foundational collectors and cataloguers of the series constitute Chapter Four. Finally, an Appendix deals with various errors in the series and what they can tell us about the circumstances under which the tokens were struck. This book offers the kind of presentation and analysis that have never been undertaken previously with any individual series of pre-Confederation Canadian tokens.

Christopher Faulkner is the author of two previous books from Spink, the award winning The Holey Dollars and Dumps of Prince Edward Island (2012) and Coins Are Like Songs: The Upper Canada Coppers, 1815-1841 (2016).

You can support Coinsandcanada.com by buying merchandise like shirts, mugs, and more!

Contact us to show your numismatic products on Coinsandcanada.