Bank of Upper Canada, penny token, 1850 - Articles on tokens and medals of Canada - Coins and Canada

The Bank of Upper Canada was established in 1821 in York (Toronto, Ontario) under a charter granted by the Province of Upper Canada in 1819. When Upper and Lower Canada were united in 1841 to form the Province of Canada, it was decided that only the bank that held the government accounts should have the right to issue copper tokens. This privilege was enjoyed by the Bank of Montreal until 1848. Following the passage of the Rebellion Losses Bill in 1849, rioting in Montreal led to the destruction of the legislative buildings and the capital of the province was transferred to Toronto. As a result, the right to issue tokens passed to the Bank of Upper Canada.

Between 1850 and 1857 the Bank of Upper Canada issued a series of handsome penny and halfpenny copper tokens. The obverse of a penny token issued in 1850 is shown and features a St. George and the dragon motif encircled by the legend BANK OF UPPER CANADA and the date. The St. George motif was designed by Benedetto Pistrucci for the British sovereign of 1817 and is considered to be the definitive representation of the theme. The token is about the size of a Canadian silver dollar and is part of the National Currency Collection, Bank of Canada. 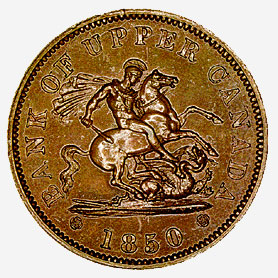