The chronic shortage of small coins during the first half of the 19th century gave rise to a series of attractive copper tokens known as "bouquet sous." In 1835 the Governor of Lower Canada granted the Bank of Montreal the authority to issue copper tokens of good weight to meet the need for small change. The front side of the tokens showed a bouquet of roses, thistles, shamrocks and wheat and the reverse carried the denomination, "Un Sou," hence the name "bouquet sous." In 1836 the Bank of Montreal was permitted to add its name to the legend on the reverse. In 1837 La Banque du Peuple was also authorized to issue "bouquet sous."

These tokens became so popular that many lightweight imitations in both copper and brass were soon put into circulation by unscrupulous individuals. The genuine tokens were manufactured in England and in the United States, but the counterfeit pieces were strictly a Canadian product. Altogether there are over fifty varieties of these tokens, several, both genuine and counterfeit, showing the denomination in the very ungrammatical form of "Un Sous." Since these tokens were produced in England this was obviously the work of a non-bilingual die cutter. The specimen shown is one of the genuine tokens issued by the Bank of Montreal and is in the National Currency Collection, Bank of Canada. 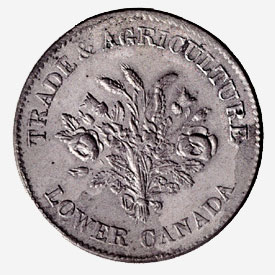