In an effort to alleviate the chronic shortage of small change in Lower Canada in the 1830s, several of the chartered banks were authorized to issue copper sous showing a bouquet of roses, thistles, shamrocks, wheat and maple leaves. The piece illustrated was issued by La Banque du Peuple. It has the customary bouquet on the obverse side and pays tribute to AGRICULTURE & COMMERCE in BAS CANADA. As can be seen from the illustration, the reverse side shows an attractive wreath of maple leaves. Barely noticeable, but clearly visible, are two symbols of liberty associated with the political troubles of 1837. They are a star at the left side and a liberty cap at the right. For this reason this token was known as the "rebellion sou." There are over forty different varieties of bouquet sous but this is the only one for which the engraver is known. He was Joseph Arnault of Montreal, one of the earliest Canadian die engravers. The specimen shown is in the National Currency Collection, Bank of Canada. 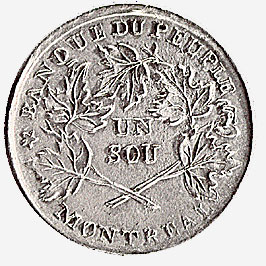