Counterstamps have long been used on coins and tokens to indicate a change in issuing authority or in value, to convey political statements or simply to advertise a business or its products. The most prolific issuer of counterstamped pieces in 19th century Canada was Devins and Bolton, a firm of chemists and druggists in Montreal. This firm operated very successfully from 1863 until its dissolution around 1880. This was the golden age of patent medicines and Devins and Bolton excelled in the art of advertising. Their advertisements abound in contemporary publications. In addition to their own products, such as DEVINS AND BOLTON'S PURE COD LIVER OIL AND HYPOPHOSPHITES, which had the "Consistancy [sic] of Cream, agreeable to the taste and retainable on the most delicate stomach," and CHILDREN'S CARMINATIVE CORDIAL, advertised for "Teething Pains, Loss of Sleep, Convulsions, Restlessness, Colic, Dysentry [sic], &c.," they were Canadian agents for VICHY MINERAL WATERS AND SALTS and also for "the most popular French Medicinal Preparations of the day."

Today, however, the firm is remembered not for its published advertisements, but rather for its practice of counterstamping copper coins and tokens. Devins and Bolton culled from circulation vast quantities of copper and brass tokens as well as semi-official halfpennies and foreign copper pieces, and had them stamped DEVINS & BOLTON MONTREAL. This counterstamp has been found on a large variety of coins and tokens, including Canadian colonial tokens, U.S. large cents and tokens, and miscellaneous foreign pieces. The earliest is a British halfpenny of George II dated 1748 and the latest, a Swedish ore of 1865. The piece illustrated shows the Devins and Bolton counterstamp applied to a Canadian colonial piece, a halfpenny token of Prince Edward Island, dated 1857. This token, slightly larger than a 25-cent piece, is part of the National Currency Collection, Bank of Canada. 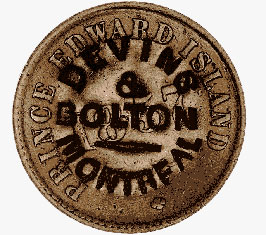