You are: Home » Tokens and medals » Articles » Ewen McLeod and his Wheatley River Token

At the turn of the last century, entrepreneur Ewen McLeod flourished as the operator of a country general store. There, as in most stores of that type, one could buy almost anything. From a pound of nails to a barrel of flour, material for a dress or a shirt good enough for Sunday, the country store had it all. A successful store became, like the church, the school, and the community hall, a focus of the community. It is not surprising that stores would work hard to promote their business and win customer attention and loyalty. This desire for success is especially true of Ewen McLeod during the brief period he was in Wheatley River. One of his attempts to promote his business was his Wheatley River token, today a scarce piece of Prince Edward Island numismatic history. This token is very much sought by Island collectors and especially those who are serious collectors of Island material.

Ewen McLeod (sometimes spelled MacLeod) and his brother George S. McLeod operated a general store in Hunter River in the late 1800s. They purchased that store shortly after Ewen returned from the United States. Ewen had worked there for a number of years and had been able to save some money. While in business in Hunter River he met his wife -to-be, Margaret Jane Buchanan. In time they had three children, George Daniel (1890-1971), William Lawrence (1892-1976)), and a daughter Ida Louisa who died in infancy (September 26, 1896). Later, while at Oyster Bed, the McLeods adopted a daughter, Jean (1911-1931). Meanwhile, George McLeod eventually married and sometime after that the brothers dissolved their partnership.

In Wheatley River, not many miles away from Hunter River in central Queens County, Alexander MacMillan ran a shipbuilding business. MacMillan was very successful, and after shipbuilding had run its course he built a store in his community sometime in the 1870s. It is said he did a booming business for a number of years, up until his death. After he died, MacMillan's son operated the store and had it up for sale. Hearing the Wheatley River store was available, Ewen McLeod was able to rent it from the younger MacMillan in late 1899. 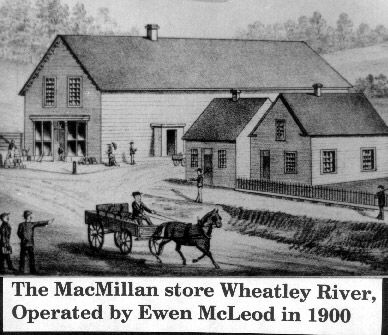 As well as being a country merchant, Ewen McLeod was a numismatist. It is not known when he began collecting, but he joined the American Numismatic Association in 1899. According to Fred Bowman's records in the Bank of Canada National Currency Collection library, McLeod was member number 129, quite an early number for an international organization such as this. The seriousness of his collecting is evident by the material which he accumulated and which was later listed in detail in an auction catalogue. He must have had a good knowledge of tokens, too, when he issued his own token in 1900. This brass piece is actually an advertising card, marked "Good For 5c In Trade" and designed to publicize his new venture in Wheatley River. It is estimated that he had one hundred of these tokens minted, however this has never been confirmed. It is certainly scarce, and is viewed by Island collectors as a desirable addition.

Some of the older residents of Wheatley River who either remember McLeod or have heard their parents talk of him say he was a good businessman. He was, very competitive, one who would buy as cheaply as possible and sell cheaper than his competitors. It is said he once got caught with inferior quality grass seed, which polluted his customer's farms with weeds.

Unfortunately, McLeod and his customers didn't get to use his tokens for very long. It seems a butter and cheese maker from New Glasgow named Hazeltine bought the Wheatley River store out from under McLeod, buying the property directly from MacMillan, the owner. Ewen McLeod had to move out.

McLeod then moved to Oyster Bed and operated a general store there for the next fifteen years. While there, he used to sell coal that came in on schooners and was carried over the sand bars in shallow-draught flat-bottom boats. One variety of coal which McLeod imported was much in demand by area blacksmiths for their forges. He also brought in limestone for the Wheatley River kilns.

It would appear that soon after the move to Oyster Bed, McLeod decided to sell his collection of Canadian and Prince Edward Island tokens. The reason for this sale is not known, but perhaps he required capital for his business or to meet the expenses of his growing family. As noted in the catalogue of Lyman H. Low of New York, dated January 23, 1903, Ewen S. McLeod's collection was to be sold at public auction. Some of the items he had in his collection rarely come up for sale today and when they do, they usually sell well above book value.

Several items in McLeod's collection are worth noting. Three very early colonial pieces pertain to New France, and include Breton 502, a 5 sol silver piece in VG described as "not common", Breton 510, a French "jeton" dated 1751 in VF condition, as well as Breton 517 in the same series. From Quebec, McLeod had the Montreal and Lachine Railroad Company's "Third Class" copper, in VF; a rare Maysenholder & Bohle Goldsmiths token (Br. 566); and an uncirculated example of the token issued by numismatist A. Desroches (Br. 573).

Ontario was represented in McLeod's collection by Breton 729, the Upper Canada 1821 halfpenny token with "Jamaica" inscribed on the cask, and from New Brunswick, he owned the rare McDermott token of Saint John (Br. 914).

McLeod's native province was represented by the equally rare James Milner "sheaf of wheat" token of Charlottetown (Br. 916) in VG condition; both varieties of the John Joy token (Br. 995 and 996); Breton 1004 and 1005, both early halfpenny tokens; and two McCausland pennies. In total there were 77 lots, with some lots having many more than one token. Lot 172 for instance had one 1805 Hibernia, 3 Wellingtons, plus eight other tokens, a total of twelve items in one lot. The McDermott token from Saint John sold at the McLeod auction for $16 while the Milner "sheaf of wheat" token sold for $14. Today's prices for the latter two coins have certainly kept up to, and risen above, the rate of inflation.

After Ewen McLeod left the store in Wheatley River his new location in Oyster Bed was only three miles away. He must have been stiff competition for his rival, Hazeltine. A short time later Hazeltine sold the store to Herb Andrews who in turn sold it to Toff Ling. It is said that Ling did a great amount of business for a number of years and made some money. One day, however, when he came home from Charlottetown a little intoxicated he began to fool around with some matches. One of the match heads flew off and landed in some cotton material, which ignited. Afraid that some gun shells handy the burning cotton might explode, Ling ran outside only to see his store -- and Ewen McLeod's former store -- burn to the ground.

After he left the store business in Oyster Bed, Ewen McLeod moved to a farm in Hunter River, on the north side of Route 2 at the top of the hill on the way to Charlottetown. Later he became crippled and when he couldn't carry on farming, he moved in to the seven mile house -- the Hooper House -- at the intersection of Route 7 and Route 2 in Milton, P.E.I. Ewen McLeod, pioneer Island numismatist, died in 1932. His wife Margaret died in 1938, and both are buried in the Hunter River cemetery.

Ewen McLeod is remembered as a quiet man, a shrewd businessman, and a bit of a prankster. He is remembered too for his Wheatley River Token of 1900.