The Governor and Company of Adventurers of England Trading into Hudson's Bay, better known as the Hudson's Bay Company, was founded in 1670. A little over one hundred and fifty years later, trading posts had been established from Hudson's Bay to the Pacific Ocean, forming the world's first chain of department stores. Their main customers were the First Nations hunters and trappers who brought in their furs to barter for the European's goods. In order to facilitate this trade, the Company established the 'made beaver' as the unit of account, a 'made beaver' being a prime adult beaver skin. All other furs and all European trade goods were valued in 'made beavers.' The Company's factors soon found that some sort of token was necessary to stand for a 'made beaver.'

At first these tokens were made locally from wood, ivory, shell, stone or scrap metal. When an Aboriginal brought his furs to a trading post they would be valued in 'made beavers' and a pile of tokens would be placed on the counter; then as he made his purchases tokens would be withdrawn from the pile until they had all been used. Eventually the Company provided a supply of manufactured metallic tokens to its trading posts. At first these were denominated in 'made beavers' but later, as the First Nations became more commercially sophisticated, the tokens bore denominations in dollars and cents. The brass token illustrated was used at trading posts in British Columbia about ninety years ago. It is part of the National Currency Collection, Bank of Canada. 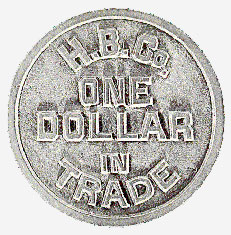