During the first half of the 19th century, the great variety of coins in common usage in British North America contributed to a very chaotic currency situation that left the system open to many abuses. Nowhere was this more evident than in Lower Canada. To compensate for the shortage of circulating coins, it was the practice for merchants to issue their own copper tokens. Excessive issue and also the failure of many issuers to redeem their tokens caused a widespread lack of confidence in them and by the late 1820s this practice had temporarily broken down. Soon the only available copper coins that were widely acceptable in Lower Canada were the British halfpenny pieces, most of which were very old and very worn.

This situation gave rise to one of the most intriguing tokens ever to circulate in Canada: clever imitations of the worn British halfpence that flooded Lower Canada about 1830. The technique involved was to leave the dies in an unfinished state; a bust appeared on the obverse and an incomplete Britannia or harp appeared on the reverse. A popular legend attributes them to a Montreal blacksmith who drank heavily and made them to pay for his liquor. Despite their crude appearance and dubious source, these "blacksmith" coppers were accepted by the public and for a time formed part of the circulating currency. The piece illustrated is part of the National Currency Collection, Bank of Canada. 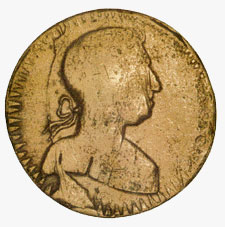