In 1808 three bridges were built linking "Bout de l'Ile" or the east end of Montreal Island, with the mainland via Bourdon Island. The Bout de l'lle bridge connected Montreal Island with the smaller Bourdon Island and from there two bridges, the Lachenaie bridge and the Repentigny bridge, were built linking Bourdon Island with the mainland at the confluence of the Assumption and St. Lawrence Rivers. Lachenaie was located on one side of the mouth of the Assumption River and Repentigny on the other.

Tolls were charged on the bridges and a series of tokens were manufactured to serve as tickets. There were three different obverses, as the token used depended upon the particular bridge on which a traveller began his journey. The piece illustrated, for example, was for use beginning at the Repentigny bridge. A translation of the inscription would read FROM REPENTIGUY TO THE ISLAND OF MONTREAL OR TO LACHENAIE." Note the English engraver's inadvertent substitution of a U for the last N in REPENTIGUY and an N for the U in each obverse was coupled with four different reverses that read PERSONNE (a person on foot), CALECHE (open carriage), CHEVAL (horse) or CHARRETTE (cart).

The toll for each mode of travel was different, hence the need for separate tokens. The Bout de l'Ile tokens were in use for only a short time, because the bridges were swept away during a spring thaw and were not rebuilt. The token illustrated is part of the National Currency Collection, Bank of Canada. 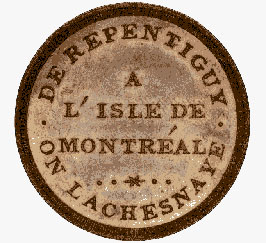