When faced with shortages of official coinage, Canada's early citizens resorted to a variety of novel substitutes such as playing cards, paper I.O.U.s, and even brass buttons. The illustration features one such button used during the late 18th and early 19th centuries. At that time Canada produced no coinage of its own, so people accepted whatever tokens and foreign coins were available. As the supply was insufficient for the demands of the growing colony, some individuals supplemented their holdings.

Among soldiers constantly trying to stretch their pay, buttons were a favourite substitute for coins. Typically, the shank was removed from the back and the button was flattened before being placed into circulation. A wide variety of these pieces from various British and Canadian regiments are known to have been used in this manner. Most of these buttons were displaced from circulation in the late 1830s when large quantities of heavier bank tokens were introduced.

The button shown was struck for the Montreal Militia, the largest of five district militias in Lower Canada following the War of 1812. It bears the simple incuse legend "Montreal British Militia," was struck in brass and originally finished in gilt. The button is about the size of a British halfpenny and would have passed as its equivalent. This piece forms part of the National Currency Collection, Bank of Canada. 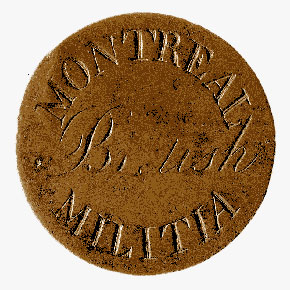