Lower Canada, Tiffen token, one halfpenny, 1812 - Articles on tokens and medals of Canada - Coins and Canada

You are: Home » Tokens and medals » Articles » Lower Canada, Tiffen token, one halfpenny, 1812

Nowhere in British North America did the private copper tokens issued by merchants and others have a more fascinating evolutionary history than in Lower Canada - now Quebec. In the 1820s and 1830s, trade in Montreal, the colony's commercial centre, created a strong demand for coinage. As coins were often in short supply, privately produced tokens filled the void. Tokens were not legal tender and their circulation was against the law. However, this was little deterrent at a time when legal coins were scarce. The first private coppers were heavy pieces, about the same weight as the penny and halfpenny coins they supplemented.

However, by the 1830s the tokens were barely half the weight of the official coins and, at times, were so numerous that people would no longer accept them. Various tricks were therefore resorted to in order to make their circulation possible. One interesting approach was to copy the designs of tokens that had previously been of heavy weight and had enjoyed wide circulation. About 1832 a Montreal grocer named Tiffin issued copper halfpenny tokens. They bore the date 1812 and were imitations of much heavier pieces produced twenty years earlier. The obverse carried a bust of King George III surrounded by a wreath of oak leaves and acorns and the figure of a seated woman representing Commerce was the design on the reverse. The success of Tiffin's venture seems to have encouraged the production, in 1837, of another series of tokens of the "bust and Commerce" design which were also dated 1812. In the latter case, however, the pieces were crudely engraved and were struck in brass, a less expensive metal than pure copper. The token shown is part of the Bank of Canada's National Currency collection. 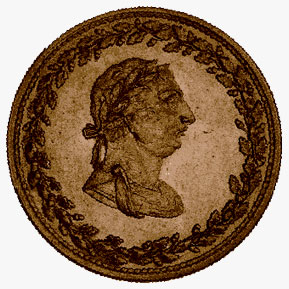