New Brunswick, which was originally part of Nova Scotia, was established as a separate colony in 1784. For several decades thereafter, a mixture of foreign coins obtained in trade provided an adequate circulating currency for the new colony. By the 1840s New Brunswick's population and trade had expanded to the point where there was a real need for a local currency, and in 1843 the legislature decided to issue copper penny and halfpenny tokens. The order for the coins was placed without imperial sanction, however, and when the British authorities learned of the proposed coinage New Brunswick was ordered to abandon its plans immediately. The Colonial Office was informed that the contract had been cancelled, but the coins (dated 1843) were still put into circulation. This issue was sufficient to meet the needs of the growing colony for the next ten years.

By 1853 additional currency was required and the New Brunswick government requested permission to issue a copper coinage of pennies and halfpennies under the provisions of the Currency Act of 1852. Imperial sanction for this coinage was granted and the new issue appeared in 1854. The reverse design of both issues featured a frigate riding at anchor, reflecting the importance of shipbuilding as one of the earliest industries in the maritime provinces. On the 1854 coins the denomination appears as ONE PENNY CURRENCY in contrast with the phrase ONE PENNY TOKEN used on the l843 issue. The frigate pennies and halfpennies are considered to be among the most attractive of the British colonial series. The copper penny illustrated is about the size of a silver dollar and is part of the National Currency Collection, Bank of Canada. 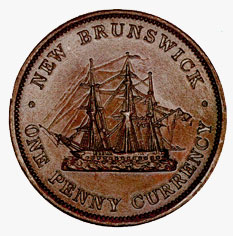