During the early part of the nineteenth century, Halifax was a major British military station as well as a trans-shipment point for supplies being sent from the United States to Europe to help the British in their struggle against Napoleon. This increased commercial activity intensified the port's need for small change, a commodity that had always been in short supply. Great Britain was in no position to come to the colony's aid at this time, since she herself was depending largely on the private production and circulation of copper tokens. Therefore Nova Scotia had to turn to private sources of supply, and the earliest tokens imported into the colony are believed to have been the 'Trade & Navigation' copper pennies, halfpennies and farthings.

Their circulation is attributed to a Halifax merchant named Haliburton, although they were undoubtedly imported into or at least circulated in other parts of British North America as well. The example pictured is a penny. The figure represents Commerce, an olive branch in her outstretched right hand and a caduceus in her left. She is seated on a bale of goods and a sailing ship can be seen in the background. The tiny H on the ground at the lower right indicates that the manufacturer of the token was Thomas Halliday of Birmingham, England. On the reverse is the interesting legend PURE COPPER PREFERABLE TO PAPER, suggesting the suspicion with which people of the time often viewed paper money. The coin shown is part of the Bank of Canada's National Currency Collection. 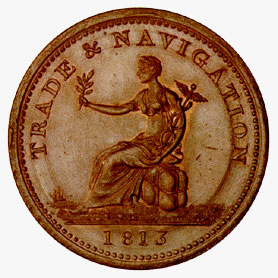