Miles W. White, a native of Shelburne, Nova Scotia, opened a hardware and ironmongery business in Halifax in 1812. His firm was one of several that supplied small copper change to the local inhabitants. These commercial tokens provided the small change necessary to carry on business transactions in a country often beset by shortages of regal coin.

In 1815 Miles White put out an issue of copper tokens which were redeemable at a halfpenny each at his place of business. One of these tokens is featured. The side illustrated carries the particulars relating to the issuer while the side not illustrated shows a cask containing spikes and nails within a circle. Above the circle are the words HALFPENNY TOKEN and below the circle the date 1815. Miles White, his brother Cornelius and a George B. Creighton formed a partnership in 1816 which carried on business under the name of White, Creighton and Co., but the new firm did not issue tokens.

The token shown is slightly larger than the current Canadian 50-cent piece and is part of the National Currency Collection, Bank of Canada. 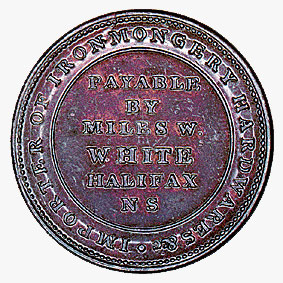