As early as 1823 Nova Scotia had a minor coinage of its own, consisting of penny and halfpenny tokens. At first they bore the bust of George IV on the obverse and a Scottish thistle on the reverse. In 1840 a rather unflattering likeness of Queen Victoria appeared on the obverse, but the thistle remained. A new issue designed by the noted English engraver Leonard Charles Wyon was brought out in 1856, showing a very handsome head of Queen Victoria. The design on the reverse was also changed at this time. At the suggestion of John S. Thompson, father of the fifth prime minister of Canada, Sir John Thompson, the trailing arbutus or mayflower was selected. This plant, also known as ground laurel, had been chosen as the provincial flower of Nova Scotia the previous year. The resulting coin is considered one of the most beautiful coins ever issued for colonial use in the British Empire. The piece illustrated is in the National Currency Collection, Bank of Canada. 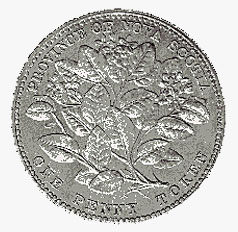