Nova Scotia and New Brunswick, anonymous, one halfpenny token - Articles on tokens and medals of Canada - Coins and Canada

You are: Home » Tokens and medals » Articles » Nova Scotia and New Brunswick, anonymous, one halfpenny token

The copper halfpenny illustrated is perhaps one of the most intriguing Canadian tokens of the early 19th century. Although the piece appears to be of British manufacture, its exact origin remains a mystery. Tokens such as this were usually put into circulation by merchants in order to alleviate chronic shortages of small change. However, this token is not dated and neither an issuer nor a place of business is indicated. It is thought that the issuer was probably a politician who favoured the union of Nova Scotia and New Brunswick, since the question of a union of the two maritime colonies did arise from time to time.

The obverse of the token features a sailing vessel with the legend NOVA SCOTIA AND NEW BRUNSWICK above and the word SUCCESS below. The side not illustrated shows an allegorical figure of Commerce seated on a bale and holding a scale in her right hand and a cornucopia in her left. The legend HALFPENNY TOKEN surrounds the seated figure. This token, which is slightly larger than a Canadian 25-cent coin, is part of the National Currency Collection, Bank of Canada. 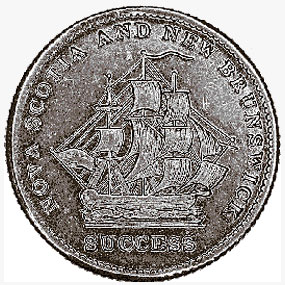