One of the commonest kinds of metallic tokens issued in Canada by merchants and others to alleviate the shortage of coins were the ones bearing a ship on the obverse side and the inscription SHIPS, COLONIES & COMMERCE on the reverse. The inscription refers to the famous statement made by Napoleon in 1811 that ships, colonies and commerce were the three British advantages that would defeat him in the end. The first of these tokens were produced in the United States and showed a ship flying the U.S. flag. Later issues, of which the specimen illustrated is an example, were struck in England and portray a ship flying the Union Jack.

Most of these later tokens seem to have been originally intended for circulation in Prince Edward Island where they were very popular. By the early 1860s, however, barrels full of them were being smuggled from Prince Edward Island into Newfoundland. This was a profitable enterprise due to the difference in the value of the currencies of the two colonies: Newfoundland currency was worth more and so the tokens specifically struck for use there tended to be heavier (and hence more costly) than those struck for use in Prince Edward Island. The Newfoundland government was soon forced to ban the P.E.I. tokens. The piece illustrated is in the National Currency Collection, Bank of Canada. 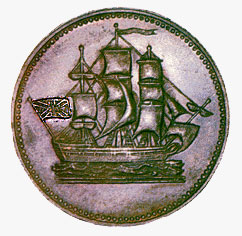