Many early Canadian companies and concerns have long since disappeared, leaving behind only the smallest physical indication of their existence or of the nature of their business. The Red River and Assiniboine Bridge Company of Winnipeg is an excellent case in point.

Although information is sketchy, this company apparently operated a passage service across the Red River in the late nineteenth century. Those using the service were required to pay a toll ranging from 2 to 20 cents, depending upon their mode of transportation. To facilitate payment, the company issued two series of passenger tokens. The first were among the earliest transportation tokens in Manitoba. They were crudely manufactured in brass or copper and hand-cut into an irregular shape, with an abbreviation of the company's name and the denomination hand-punched onto the surface. These tokens were superseded by a series dated 1898, which featured finer workmanship and was manufactured for the exclusive use of passengers travelling on foot. Apparently, customers using other forms of transportation were required to pay cash.

The token featured is from the second series. About the size of a current Canadian fifty-cent piece, it bears the name of the company with a facsimile signature of its president, Mr. C. Chipman, on one side, and the denomination, date and type of usage on the other. The illustrated token is the only known example in copper - all other specimens are made of aluminum. This token forms part of the National Currency Collection, Bank of Canada. 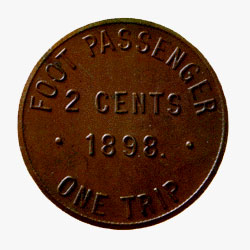