From the 1880s until the beginning of the First World War, the merchant's token enjoyed a heyday in Canada, alleviating a general shortage of small change while offering direct advantages to business. Inexpensive to produce, the tokens served as advertising and, in theory at least, were redeemable only in the establishment that issued them. Some pieces could be exchanged for a service (e.g., one shave); others carried cash value (e.g., 10 cents in trade). In practice, especially in smaller communities, the tokens circulated as money, with the issuers redeeming their tokens from other merchants as well as from individuals.

In the years following Confederation, the general shortage of small change in circulation was particularly acute in British Columbia. On Canada's west coast, trade was primarily north-south, and the coin most often encountered was the U.S. 25-cent piece. Predictably, tokens issued by B.C. merchants related to the U.S. quarter dollar and bore values of 12 1/2 cents or 6 l/4 cents, instead of the 5- or 10-cent values found on eastern tokens.

The 6 1/4-cent brass token illustrated is approximately the size of the current Canadian five-cent piece. It was issued in the 1890s by the Rossland Billiard and Bowling Hall, Rossland, British Columbia, and forms part of the National Currency Collection, Bank of Canada. 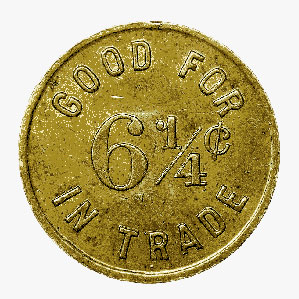